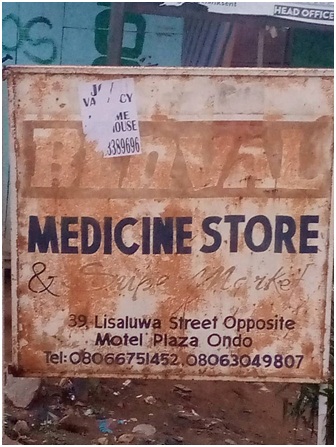 Detectives of the Fagun Police Division in Ondo town, have arrested a ‘quack nurse’, identified as Conse Nneka Nwosu, over the death of a pregnant woman at  lisaluwa area in Ondo West local government area of the state.

The deceased, Queen Innocent, was reported to have died as a result of complications during child delivery at Nwosu’s ‘home clinic.’

A police authoritative source told The Hope Metro that Nwosu, who has a clinic in her home, has been parading herself as a qualified nurse in the community.

The source who spoke on condition of anonymity, said the deceased, who had gone into labour, died in the process of delivery as the suspect could not aid the delivery.

The Hope Metro gathered that while trying to give birth, the deceased threw up and became unconscious, after which she gave up the ghost.

According to the source, the deceased went to the clinic alone because she had been going there for medical treatment and attending ante-natal, before the ugly incident.

She was said to have called her mother to meet her at the clinic , but her mother who could not go sent one of her sons to give her food and stay with her.

The source said her brother brought food for her and she ate it before they commenced the delivery process.

He said, “ She threw up the food, but Nwosu could not resuscitate her, hence she died,. The ugly development  did not go down well with the family of the woman who reported the matter at the police station and she was arrested.

“Further information revealed that the deceased died as a result of complications that arose while trying to deliver her baby.”

On her part, the suspect told The Hope Metro that the deceased had no pain or complications during the process.

“The only thing  I noticed was that she vomited and died.

“The deceased had a child before the pregnancy. But the child was not delivered in my hospital. She was in Akure when she gave birth to her firstborn. But some of her relatives use to patronise me and they are the ones that referred her to me for medical treatment,” Nwosu explained.

All efforts to reach the husband of the deceased proved futile at the time of filling the report.

Meanwhile, her corpse had been deposited at an undisclosed mortuary pending the arrival of her husband.