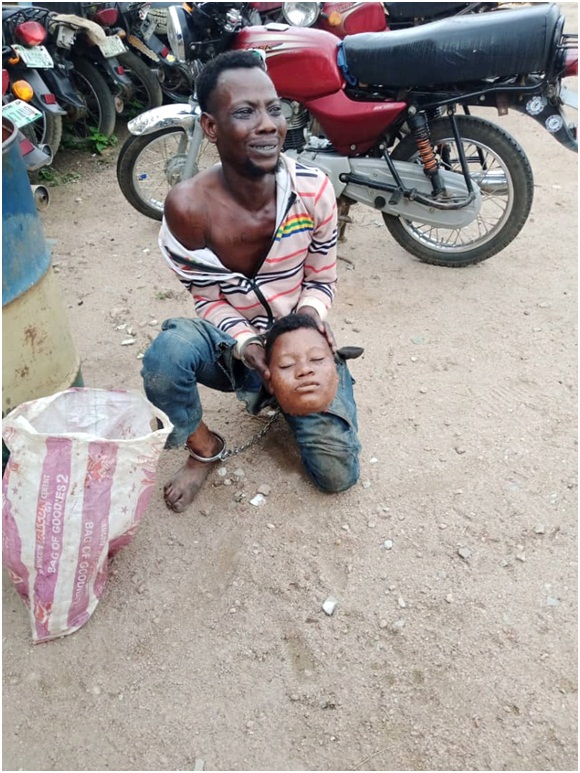 Osun State Police Command has arrested a 40-year-old suspected ritualist, Kabiru Oyeduntan for butchering a lady.
The Commissioner of Police, Olawale Olokode while parading the suspect, said Oyeduntan beheaded the yet-to-be identified lady, at Quarry area of Apomu.
“On Thursday, around 9pm, credible information and intelligence led policing revealed that some ritualists beheaded an unknown lady at quarry area of Apomu.
“A team of police operatives in collaboration with the local security outfits swiftly moved into action and arrested one Kabiru Oyeduntan ‘m’ aged 40 years of Moninun compound, Ikoyi with the butchered body parts of an unidentified lady of about 20 years of age.
“The police subsequently extended investigation and conducted search on Friday at the house of the suspected killer where they recovered the head, wrist and other parts of the severed body found inside a box in one of the rooms of the suspect.”
The police boss said the suspect would be charged to court upon conclusion of investigation.
“Meanwhile, the police having critically looked at the severed body parts observed that some body parts are missing.
Meanwhile, a hit and run vehicle on Saturday evening killed a motorcyclist around Malam Tope area, Osogbo-Ikirun highway in Osogbo.
The Hope Metro gathered that the accident which happened around 9:04 pm involved a red Boxer Bajaj motorcycle with number plate RLG153QC and an unknown vehicle.
The Sector Public Education Officer for Osun Command of the Federal Road Safety Corps, Agnes Ogungbemi while confirmed the incident.
She said that the corpse has been taken to Osun State University Teaching Hospital, Osogbo morgue.