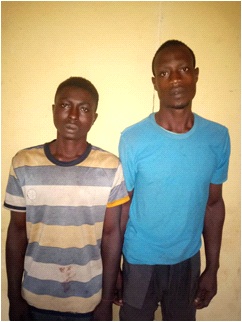 Operatives of the Ekiti State Police Command have arrested two persons suspected to be notorious burglars terrorising Ado-Ekiti, the state capital and its environment.

The suspects identified as Ayodele Kolawole,30, ‘Last Kobo,’ and Bamise Asegbeosi, 20, a.k.a ‘Kongo,” were nabbed by the Anti-Kidnapping  Unit of the command at Aiyegbaju-Ekiti, Oye local government area of the State.

According to the Police Public Relations Officer (PPRO) of the command, Mr Sunday Abutu, the suspects, who are friends, and have been on the wanted list of the police in the state for sometimes, were arrested after burgling a cosmetics shop in the ancient community, where they  carted away items worth millions of naira.

Abutu said the owner of the shop  had lodged a complaint at a divisional police station in the town, that  the suspects alongside others who are at large, had burgled  his house and carted away his property.

The stolen items  were one HP laptop, a Canon video camera, Tecno phone and other valuable materials worth millions of naira.

He said the suspects were arrested in one of their hideouts in the community with the stolen goods, following a tip- off from members of the society.

The police spokesperson added that the suspects who are currently cooling their legs in the police detention and currently helping the police to arrest other accomplices.

According to the PPRO,  “During  interrogation, the suspects confessed to the commission of the crime and revealed that they were part of a syndicate that specialize in burgling shops and residential apartments in the state.”

He gave an assurance that they will be arraigned accordingly in the court as soon as investigation is completed on their matter.