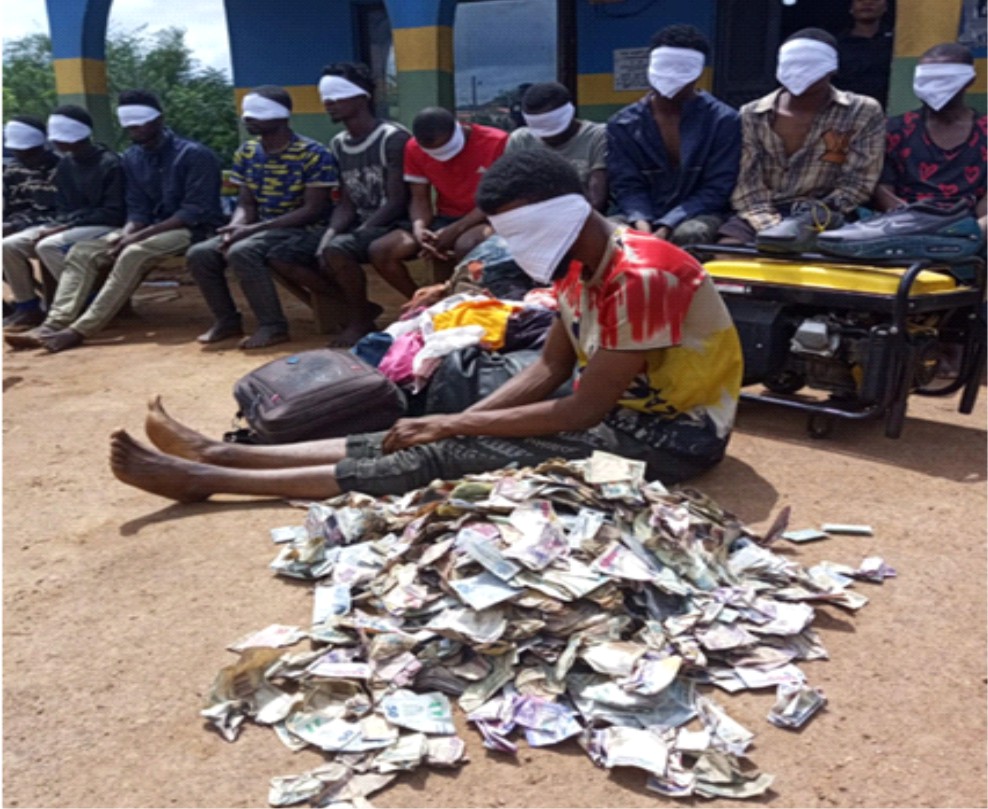 The Command also paraded three other suspects  for alleged fake kidnapping and over attempt  to collect a sum of N5 million ransom under false pretence, with 16 other suspects arrested for various crimes bordering on kidnapping, stealing, burglary, cattle rustling and robbery in Ekiti State.

Parading the suspects at the Police  Rapid Response Squad’s office, in Ado Ekiti, on Tuesday, the Command’s spokesman, DSP Sunday Abutu, said Olufemi, was intercepted  by the police at Igbara-Odo Ekiti, after perpetrating the act at the Christ Apostopilc Church’s Campground, Ikeji Arakeji, in Osun State.

Abutu said, “On the  September 16, 2022 at about 04:30am, the Command’s operatives, while on stop and search along Igbara-Odo – Akure road, intercepted one Akindele Olufemi. He was found with a school bag loaded with different denominations of naira notes.

“During interrogation, the suspect confessed that he travelled all the way from Iropara-Ekiti to Christ Apostolic Church Camp ground, Ikeji, Arakeji, Osun State to steal the cash sum of N620,115 from the church’s offering vault .

“He further revealed that he was employed as a security guard of the Church sometime ago before he voluntarily resigned”.

Also, Abutu paraded one Sunday Abah, Adejoh Friday and Simeon Ojodomo, for allegedly alleged sled kidnapping after receiving a  complain from one Omoniyi Taiwo of Kajola street, Ikere-Ekiti on 3rd September, 2022, around 4pm about alleged kidnap of  Ameh Sunday, who was working in his site at Ikere-Ekiti.

The PPRO revealed that the complainant recounted  that the kidnappers were demanding for a sum of N5 million  ransom from him.

“Upon the receipt of the information, a team of the RRS operatives  swung into action and arrested the purported victim in his hideout at Ikere-Ekiti on 16th September, 2022.”

In the same vein, Abutu paraded one Usman Mohammed over alleged involvement  in various kidnapping operations in the state,  who had confessed that his gang members  kidnapped one Omoboade Adesina in her farm at Ago Aduloju/Aso Ayegunle road, Ado-Ekiti on April 22,2022.

Also  paraded was one Oke Timilehin, a member of a notorious cult group,  who was apprehended when police operatives raided llupeju Avenue Area of Ado Ekiti , for allegedly shooting dead one Babatunde Bunmi

“On sighting the Police operatives, the hoodlum fled the scene while the victim was rescued and rushed to the hospital for medical attention.

Investigation led to the arrest of one Oke Timilehin, who confessed that he was a member of Black Axe Aiye secret cult alongside the other fleeing suspects.”