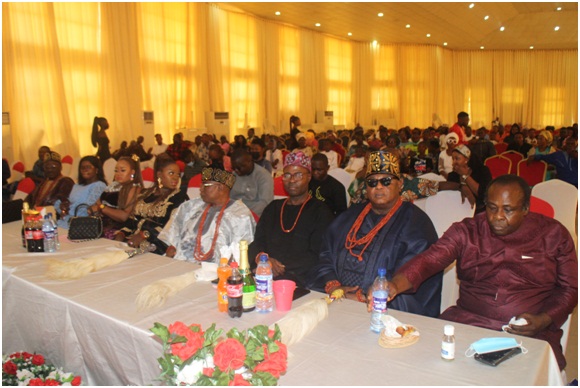 I t was a moment of excitement as Crest FM in Ondo State holds end of the year concert.
The concert, in what appeared to be a thanksgiving service for the year 2021 and an avenue for jollification, gathered people from different walks of life in their large numbers to celebrate the day at the ceremony held at St, Thomas Event Centre in Akure.

Among dignitaries who graced the event included; Deji of Akure, Oba Aladetoyinbo Ogunlade Aladelusi, his Oloris, Chairman, Board of Directors, Crest FM, Prince Ade Adekanmbi, Founder of Crest FM, Olumide Origunloye, among others.

The event also witnessed the distribution of five thousand naira (5,000) each to about 20 widows which was presented to them by Prince Ade Adekanmbi, while Lady Evangelist Bisi Alawiye – Aluko was honoured with “Gospel Music Icon of the Year Award.

The cash gifts was donated by fans of one of the station’s popular programme, Orin Iyin presented by Dayo Afolabi.

The Chairman of Crest FM, Prince Ade Adekanmbi in his opening speech, remarked that the concert was to thank God Almighty who has been protecting them since the beginning of the year 2021.

He added that the end of the year party is not only to wine and dine together only, but to appreciate God for all He has done for them.

Speaking further on the reason for the celebration, Operating Officer of Crest 87.7 FM, now 106.1 FM, Mr Adeolu Gboyega attributed it to the fact that God has been with them throughout the year, hence the need to invite gospel artistes to praise God in a unique way.

“Basically it’s the end of the year and we feel that we need to thank God who has helped us throughout this year. There have been a lot of challenges in year 2021, but in all of this, Crest FM has been actually standing very tall among its contemporaries. So the concert is basically staged to thank God”, he said.

He further explained, that the concert was meant to connect with their fans and to tell them they are grateful for supporting them all the way.

Gboyega added that; “as part of our deliberate efforts to further provide quality broadcasting to our ever loyal listeners, the National Broadcasting Commission(NBC) has approved the migration of your darling station, Crest 87.7fm to 106.1 frequency dial effective January 1st, 2022.

“This is to totally address the several identified technical issues surrounding auto tuning, clarity of sound in certain car stereo and transistor radio models”, he said.

I can make sounds like cock, lion with saxophone -Brass Oracle

I want to make money before falling in love-Iceman Sings