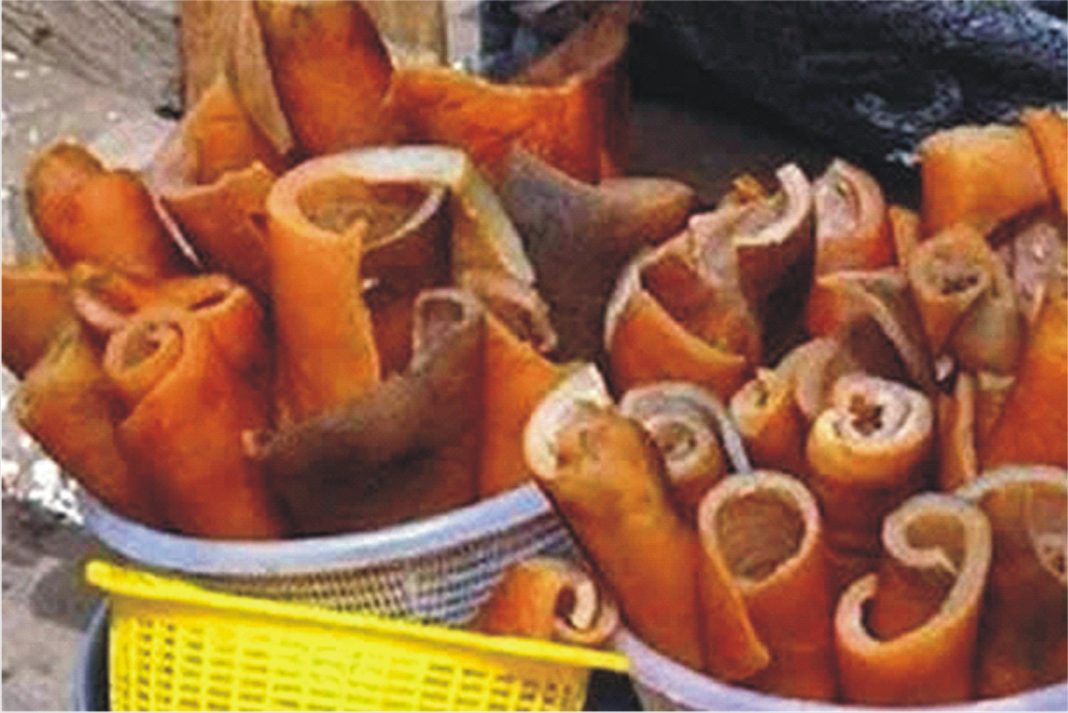 Ponmo is a delicacy that is embraced by all; old and young, rich and poor. It is made from animal hides. Locally known as ponmo, in Yoruba and kanda in Igbo, the delicacy has insinuated itself into most Nigerians’ palate.

These cow skins are succulent beef parts that is common in the southwestern part of Nigeria. It is inexpensive. This might probably be part of its attraction to many dining tables. Both at home and at public eateries.

Today, it is a popular supplement in soups enjoyed by many Nigerians. Buyers look out for thick and succulent skin that provides a delightful experience when one takes bites from it.

Ironically, it is the least tasty when compared with meat, chicken,fish and shrimps. However, it has strangely grown on Nigerians’ palate despite being tasteless and of no nutritional value to the body.

At restaurants, parties and homes, ponmo has its right of place among soup supplement. Efo riro’s garnishing is not complete without slices of ponmo dotting the face of the soup.

Many Nigerians are simply in love with ponmo consumption that the recent announcement by the Federal Government proposing legislation to ban the consumption of animal skin to revive the comatose leather industry has sparked mixed reactions.

In July 2019, the National Agency for Food and Drug Administration and Control (NAFDAC) warned Nigerians to be careful when buying Ponmo.

Although, different health experts have argued for and against the nutritional value of ponmo, it has not stopped those who love it (ponmo) to stop consuming it. In fact, it has become a daily staple delicacy for consumption.

However, NAFDAC has put forward some reasons why Nigerians must stop eating ponmo.

The agency also informed that some of the animal hides are sometimes pre-treated with industrial chemicals, which are not of food grade and could be toxic and injurious to human health.

Although, Nigerians could care less, the consumption of ponmo has been affecting our leather industry adversely because the imported animal hides are meant for industrial use by leather industries for the manufacturing of items such as shoes, bags, belts and others.

According to a 2015 survey, Nigeria is losing  $75bn global leather industry.

It becomes a drag when majority of these end  up in the tummy of Nigerians. It lessens it’s value.

In many developed countries, skins of cows, goats and sheep are not consumed but used in the production of leather and related products.Economic experts are worried that Nigeria is losing out in the comity of countries competing in the huge global leather industry because of the high rate of consumption of ponmo.

Importing and buying  ponmo gained popularity because it is cheaper than the ones produced and sold locally.

The importers therefore feed on the ignorance of Nigerians who are unable to distinguish between the one fit for consumption and the harmful one.

Food scientists have also advised Livestock farmers to note that industrial animal hides cannot and should not be used in the manufacture of animal feed as they could be harzardous to the health of their livestock.

The means of processing the ponmo in the market is dangerous to human health, even the importation alone poses as a serious threat to one’s health.

Despite these facts moving in the public domain, Nigerians’are not deterred from ponmo consumption. As daunting as the dire warning of NAFDAC appears, majority of Nigerians are undaunted as they stiffly oppose the ban saying that it is the food side dish that most Nigerian homes can afford.

While some food nutritionists argue that it has no nutritional value, others believe it does.Mrs Ijeoma Ugba, analysed that ponmo was medically proven to have calories (150g); and Total fat (4g); Saturated fat (1g); and Poly-saturated fat (0g).

At bars and restaurants, peppered ponmo is a bae and the buyers  patronizing it call it “ponmo alata suesue”. It is believed to “go down well with beer”

For a tasty peppered ponmo, a mixture of Scotch pepper (ata rodo,) and chilli pepper (sombo) is used in making the snacks. Some creative cooks even throw in some scent leave for effects.

A woman, operating a beer parlour along Arakale Road in Akure, said her customers preferred to drink their beer with ponmo, garnished with pepper.“My customers prefer ponmo with peppered stew than beef, so I buy in bulk daily,” she said.

Also, a Manager of a cafeteria in Alagbaka extension in Akure, said his customers preferred ponmo “because it is bigger and cheaper than beef”.  “My customers prefer to eat ponmo because it is sweeter and bigger than beef; so I usually get it in large quantity,” he said. The business is also a thriving one for many. A market woman, Ramota Illiasu who thrived on sales of ponmo, narrated that she had customers in several places including corporate organisations, where she delivered the commodity (ponmo) to.

She said that her children help her to advertise her product on social media and she gets patronage through the media from interested buyers. Professing that business has been brisk, she boasted ” I have customers in banks and some government offices. When they call or reach us on whatsapp, we deliver to them through designated motorcyclists”.