Popular artistes hiyack plays from up coming ones- Alaska 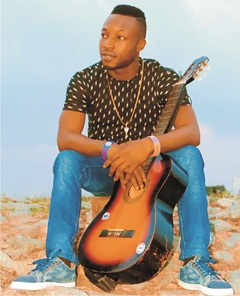 Popular artistes hiyack plays from up coming ones- Alaska

By Johnson Balogun
|
An upcoming Juju artiste, Daodu Ojo, popularly known as O Jay Alaska has said that his music is to entertain, educate and amuse his followers.

In an interview with Friday Extravaganza, he said that, he developed passion, zeal and love for music when he was in primary school.

O Jay Alaska who hails, from Oka-Akoko, Ondo state said that, he started music proper in the year 2012 which was over seven years ago.

“I remember when I was in primary school, my friends and I will stay under the tree and sing.  Any time the school had an event, I perform.  Since then, I have developed a passion for music.

The artiste who is still a student of Rufus Giwa Polytechnic said, he was able to manage his chosen career with his education, saying most of my boys are in school which made it easier for him each time he has a play on stage.

The upcoming artist said that, he faces a lot of challenges; lack of money, support and most of the time when people called him for a music at a ceremony, some of the popular artists will hijack it from him.

According to him “to become a popular artiste in Nigeria is not easy, unless God helps us.  The person must work hard.”

“I remember a day when I had stage play, when I got there they had given the play to another artiste and I returned all my instruments back home.

The artiste mentioned some of his mentor to include Taye Turaya, saying he loves the way he sings.

According to the artist, his parents supported him right from the onset even till now and noted that this is the reason he is going places and with the help of God.