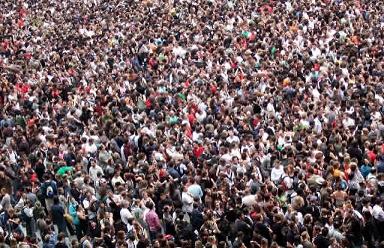 Nigeria may be sitting on a time bomb as a result of her unchecked explosive population growth, a larger percentage of which is unproductive alongside its dwindling economy, The Hope investigation has revealed.

The country’s population is projected to hit 400 million by 2050, according to a recent report by the United Nations Population Fund, UNFPA.

The United Nations said that Nigeria’s population that is increasing by 3.2 per cent annually, which projected to 216 in 2022, and may hit 400 million by 2050. This will make Nigeria the world’s most populated nation.

According to findings, any country with a large unproductive population, growing faster than its economy is bound to experience some dangers.

The Hope gathered that Nigeria needs a conscious and well monitored population control as well as grow her economy to avert dangers posed by a population that constitutes a liability as being witnessed.

Others include: Professor Abayomi Adebayo, Professor Anthony Akinlo and Dr Abiodun Adegboye all from the department of economics, Obafemi Awolowo University Ile-Ife.

Prof. Olayemi Simon-Oke opined that “population growth is a crucial indices for development in any nation if only the government knows how to properly use the growth to drive economic development.”

The don lamented that “the increase in Nigeria’s population is a big disadvantage as a result of bad leadership.

“With this projection, needless to say that Nigeria will become worse by 2050 if nothing is done to curtail the ever increasing Nigeria’s population and I believe strongly that if only the government will be sincere, they know exactly what to do in order to save us from this mess.”

Prof. Mary Fasoranti said the problem plaguing Nigeria as a nation is not that of population but rather bad leadership and poor administration.

“No doubt, Nigeria as a nation does not have what it takes to take proper care of its increasing population. The industries are moribund and the fact remains that a nation that does not produce will languish in poverty and penury.”

“Nigeria potentially is a very strong country but we do not believe in productivity, but rather dependent on countries like China to always borrow from.

“There are several implications of this, and the first one is that such country will not be able to feed its citizens, secondly, there will be  serious  unemployment.

“Another thing is that there will be increase in poverty level, it is a major problem and has negative effects on all the fundamentals of the economy including the exchange rate.

“For instance, one of the major reasons for the continual fall of naira against dollar is the low level of production in the country because productivity is the major determinant of the exchange rate.

“The only solution as advocated by demographers and economists is the control of population growth rate or alternatively, to increase the level of production, otherwise, the future is bleak.”

Dr Abiodun Adegboye said population growth in any country is an advantage if it is duly exploited, stressing that it provides ready market for production.

“Unfortunately, the needed skills are not available in the population and the only solution is that government should encourage skill development within the economy, investment in infrastructure, education and training.”

Dr Subair Adesokan, a business consultant and specialist in population studies observed that high population rate may not necessarily be a problem, posited that Nigeria’s case is a different case going by what he called “lack of corresponding productive factors of production.

According to Subair, Nigeria has a large but predominantly unproductive population that is growing at an alarming  rate than its Gross Domestic Product, GDP.

“Nigeria’s annual GDP growth rate averages 1.9 per cent, while its population growth rate is 2.6 per cent per year, resulting in a negative per capita income. Clearly, Nigeria is not harnessing the demographic dividend, where a large working-age population leads to accelerated growth”.

“The truth is that Nigeria’s population is exploding, while its economy is retrogressing. If the trend continues, as predicted, Nigeria faces a catastrophic future. Acute poverty would trigger unprecedented socio-economic-political crises.

Another expert, Mallam Aminullah Kareem stated that with the exploding population Nigeria faces another challenge as it lacks the capacity to export value-added goods and services and to attract high-quality foreign direct investments.