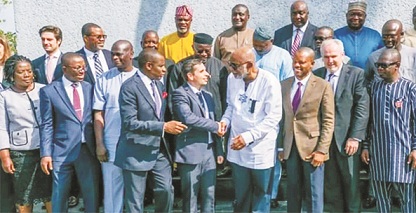 By Adekola Afolabi
|
Ondo State is at the verge of having a Deep Sea Port, called Port Ondo, following the presentation of the Outline Business Case (OBC) on the Deep Sea Port to the state governor, Arakunrin Oluwarotimi Akeredolu.

The OBC comprehensively stated the Project Implementation Plan for the proposed Port of Ondo.

The presentation was made by the project Consortium comprising a Spanish firm, Ocean Infrastructure Management (OIM), its Nigerian Partner, Franchise and Business Solutions Ltd, FBS; in the presence of officials of Nigerian Port Authority and coordinated by the Consultant to Ondo State Government on the project, Amiable Consultancy and Logistics Services Ltd.

The technical partners and Consultant for the development of Port Ondo had on Wednesday visited the site of the project at Erunna-Ogboti in Ilaje Local Government Area of the state.

Receiving the Project Implementation Plan in his office yesterday in Akure, the state capital, the state Governor, Arakunrin Oluwarotimi Akeredolu said his administration would give everything into actualising the project speedily in view of its derivable benefits not only to the economy of the state and the country but to the entire West African subregion.

“Port of Ondo will be less than 45 minutes to Lagos by road and by water, it will be shorter. With the location, Ondo will become a nerve center. Citing the port here is one of the best things that will happen to, not just Ondo, but Nigeria.

“We believe that it is something we need to achieve within six months and that is why I said the timeline is so important.

“We are not ready to waste any time. We are ready to give all the support. We are serious about this port.

“Look at the draft; it is not found in any other place in Nigeria. We keep dredging when we have a natural dredge in Ondo State. I’m told that mother ship can berth in Port Ondo. Let us look at the report. Let’s focus on the viability of the Port Ondo,” the governor stressed.

The governor who used occasion to appreciate the Nigerian Port Authority for supporting the actualisation of the project assured that the state would put in the funds and all other needed incentives to make Port of Ondo the toast of critical stakeholders in the global Maritime Industry.

While expressing delight that the consortium and the Project Consultant have agreed to a joint office in Lagos before the officials of the foreign firm return to Spain, the governor said the time frame for the development of the implementation plan can be drastically reduced to hasten the actualisation process of the port.

He revealed the feasibility of the proposed Port of Ondo has shown that it is economically viable because it has the deepest natural draught with the longest coastline in West African subregion and with the capacity to harbour any ship in the world.

The Chief Executive Officer of Ondo State Development and Investment Promotion Agency, ONDIPA, Mr Boye Oyewumi assured the governor that the project partnering firm and consultant were working assiduously towards realising the dream of Port of Ondo.

He said the adoption of the Outline Business Case, OBC, would kickstart the processes that will lead the grant of a Certificate of No Objection by the Infrastructure Concession Regulatory Commission, ICRC, before the Federal Executive Council gives the Deep Sea Port License to Ondo State.

The Project Consultant, Amiable Consultancy and Logistics Services Ltd who spoke thorough its Managing Director, Mrs Aina Egharevba assured that the project was on course and that no one was doubting its viability.

An indepth presentation made by the Consortium highlighted the prospects of Port of Ondo towards getting the project actualised in record time.

Mr Ekong Etim of Franchise and Business Solutions said the Consortium were working to ensure that all approving authorities would support the project for it to become a reality.

Also Messrs Ricardo Sanz and Jose Mana Arana of Ocean Infrastructure Management, OIM , reiterated their commitment to the project and appreciated Governor Akeredolu for providing their firms the opportunity to turn around the Martine Business in Nigeria and Africa through the engagement of their firm in the Port of Ondo project.

The Managing Director of the Nigerian Port Authority represented by Mrs Elizabeth Awuletey described Port of Ondo as hugely viable and that it would revolutionise the Martine sector in the country.

She assured that NPA would support the actualisation process of the project for the benefit of the nation’s economy.