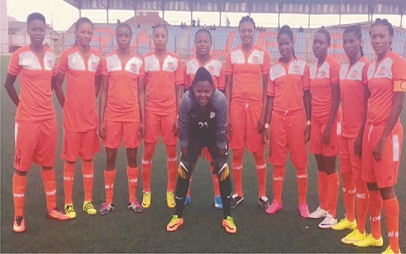 By Femi Atolagbe
|
The coast is now clear for Sunshine Queens FC to participate in the much anticipated super IV playoffs for Elite teams in the Nigeria Women Professional football league.

This follows a one Nil home win against Adamawa Babes at the Ondo state sports complex, Akure.

An elated precious, who spoke with journalists after the game expressed joy at scoring the lone goal that sealed the win

” I’m glad I found the back of the net today, it’s a thing of joy to score and I dedicate the goal to God almighty and my teammates”

Both Sunshine Queens  and Amazons are awaiting results of group A matches to know which other teams will qualify for the super IV playoffs.

The soft spoken football Administrator described the win and qualification as results of hard work exhibited by the players, coaches and other staff members of the team since the beginning  of the season.

He said the result will help shape up the girls ahead of the task ahead to earn the desired results .

” It’s a good one to end on a winning note, the victory I believe will help the girls in prosecuting other matches in the super IV playoffs itself, I’m satisfy with the results this season, it’s a well-done job.”

Alhaji Norwayas he is fondly called assured the  players of the management’s support at all times, saying their welfare will always remain a priority.