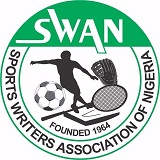 By Femi Atolagbe
|
Sports Writers Association of Nigeria  Ondo State Chapter (SWAN) has advised  the state government and the management of Sunshine Stars to begin early preparations for the incoming soccer season to avoid will be battling relegation.

This is contained in a communiqué issued at the end of the association’s Congress held at the NUJ press center Akure.

It urged well meaning Nigerians to come to the rescue of former Sunshine Queens goalkeeper, Bidemi Aluko, who is currently battling with  breast cancer .

The communiqué calls for fairness in resolving the Nationwide League One (NLO) matter as it affects the match between Akure City FC and Ajiroba Ooni FC where the visitors from Ife defeated the home team 9-2.

Ondo SWAN appreciated the management of the state sports council for supporting the association, especially the provision of a secretariat for the association.

It also calls on the council to do its best in solving the problems associated with the non payment of allowances of athletes to improve their output.