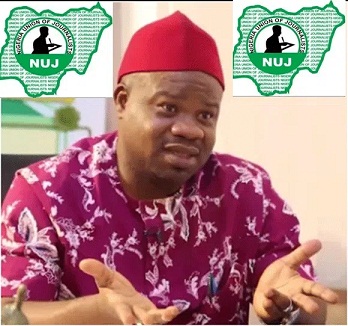 Ahead of the 2023  Presidential elections, all presidential candidates  have been charged to ensure that they appear at the presidential debate.

Making this call was Comrade Chris Isiguzor, the National president of Nigeria Union of Journalists (NUJ) during a two day training for journalists and Civil Society Organizations (CSO) in the SouthWest on Conflict-Sensitive Reporting and countering fake news In Ikeja, Lagos.

Iziguzor who stated that one of the important responsibilities of the press is bringing together the different political parties and candidates to debate, believed that the debate is a veritable means through which voters can have ideas on where to cast their votes.

While declaring the training open, he noted that the topic “Role of the Media in the conduct of Peaceful Elections” is very important at this time, given the fact that election in Nigeria is normally considered by politicians as do-or-die affairs.

He said the training was timely for the media professionals to brainstorm ahead of the election so as to prepare very well for the onerous task ahead.

The workshop was organised by Independent National Electoral Commission (INEC), and Center for Democracy Development (CDD) in conjunction with Nigeria Union of Journalists (NUJ) and had in attendance, journalists and Civil Society Organisations from different states in the SouthWest.

The NUJ president charged participants on adhering strictly to the ethics of the profession in the discharge of their duties.

His words “In whatever we do as Journalists, it is very necessary to take the issue of peace as a cardinal point and take into consideration the need to be careful so that areas that are already fragile do not explode or implode. Peace is a basic requirement in a democracy.

“As Journalists, we are expected to develop a thorough understanding of the elections and the electoral process, an understanding of conflicts and convey these to citizens in a way that reflect the truth in all their complexities. The proper foundation established by Journalists will provide citizens with the opportunities they require to make informed judgments about issues involved and perhaps help the government in taking meaningful decisions.

“While discharging their duties Journalists should never attempt to deviate from the ethics of the profession because it will not augur well for the nation. Since the role of the media in Nigeria’s emerging democracy is central, media professionals must maintain the highest possible standards in their practice.”

He said that the role of Journalists in the proper functioning of a democracy cannot be ignored and canvassed that their “watchdog” role should center on unfettered scrutiny and discussion of the successes and failures of politicians , governments, and the electoral management body.

He advised Nigerian Journalists to work towards the advancement of the right of freedom of expression, access to information, freedom of the press, media independence, conflict transformation and peace building.

“ These are prerequisites for open governance and development, which ultimately serve the public interest.”

Earlier in his Opening remarks, Mr Austin Ahigbe, a senior programmes officer working with Centre for Democracy and Development who represented the Director, Idayat Hassan noted that as a media organization, people wait upon the media for authentic information.

He added that an already broken news cannot be taken back, and urged that the media should try as much as possible to avoid fake news.

He added that the media has a big role to play in the election, therefore must fact check news before posting.

In his goodwill message, Lagos State NUJ Chairman Comrade Adeleye Ajayi stated that as journalists are looking forward to 2023 general election, they should not be biased in their reportage, they should be familiar with the candidates, exercise caution in disseminating news, report accurately, say no to violence and champion against vote buying.