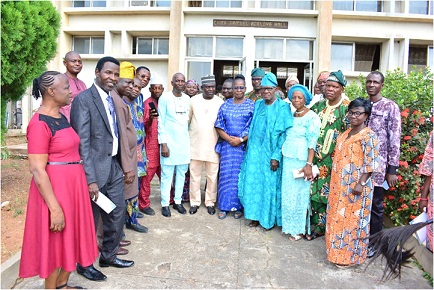 Cooperative societies in Nigeria have been tasked to prioritize the initial objectives of their establishment rather than the business benefits.

Guest Lecturer at the 70th Anniversary of inauguration of the  Cooperatives development policy of Western region 1952, Mr Adebayo SF who gave the charge, stated that cooperatives represent a strong, vibrant and viable tool for the powerless to change their lives.

The programme which was held in honour of late Chief Obafemi Awolowo has as its theme as “Exploring strategies for building the cooperative movement of the South West Nigeria.”

According to the lecturer, co-operative is as old as human race. “It is observed among insects like ants and human of all ages, races and also stands as one of the principle agents of economic development of any nation not just an avenue for job creation, but training ground for city and rural dwellers.

Adebayo stressed that there is a need for those who want to work together for some common economic objectives to form a union known as cooperative society.

While stating that the original objective of cooperatives is to use it to help elevate one another, Adebayo however said potential lose of identity, misplaced priorities, selfishness have caused a major setback on their existence.

His words: “Cooperatives are becoming more like investor -focused competitors as if they were operating in a traditional investor -owned, profit- focused business whose sole and ultimate purpose is to generate and increase shareholders’ values.

“Therefore, there is a need for societal approach involving all stakeholders for improvement and rebuilding of  the group as well as putting sustainable development, qualitative growth and  economic well-being as ultimate goal through adoption of appropriate strategic operation towards achieving desired objectives.

” Meanwhile, government has the intention to foster and nurture cooperatives to grow”.

He appealled to representatives in the departmental unit to ensure they bring the knowledge of the department in the state to bear to the benefits of the group.

In her address ,the representative of the Ondo State Governor, who is the  Commissioner for Commerce, Industry and Cooperative services, Mrs Lola Fagbemi stated that over the years , subsequent government legislated and supported  cooperatives organisations that sustained and strengthened cooperative operations in the south west.

She added that their operations have spread tentacles across every nooks and cranny with various business enterprises across the South west.

She stated that cooperative Policy Trust of Arakunrin Oluwarotimi Akeredolu  Administration under his REDEEMED Agenda is to develop participatory cooperatives institution for self -help, wealth creation ,poverty alleviation employment generation and to improve the socio-economic lives of members.

In his address, President of Odua Conglomerate, Elder Felix Bamidele, represented by his vice, Engr Micheal Olowoyeye, congratulated all the members across the region and described the programme as a thing of joy.

He revealed that modern cooperatives were introduced through the promulgation of the cooperative societies ordinances No 390 of 2935 and that in 1952, following the regionalization law and became a regional affair being a concurrent item.

“And as such, the cooperative union of Western Nigeria, CUWN, registered in 1952 as the 434th cooperative society on the 29th March 1952,” he said.

Mr Shola Obanla ,Local Organising Chairman described the cooperative as an opportunity to aid the economic development of the less privilleged so that they live up to their desired expectations.

Award was given to beneficiaries based on the numerous roles played for the success of the group.