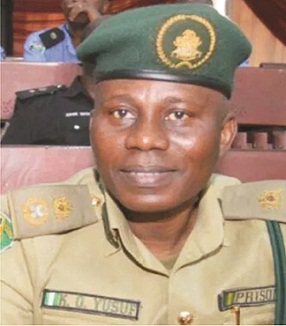 By Michael Ofulue
|
In its determination to ensure effective prisons decongestion in Nigeria, Comptrollers of state prisons commands have been charged to adequately keep records of facilities of all inmates currently in  their custody for easy assessment.

The Assistant Comptroller General (ACG) in charge of Zone F Ibadan comprising; Ondo, Oyo,  Osun and Ekiti States, Mr Kasali Yusuf, stated this while speaking with The Hope Metro in an interview at the Ondo Command headquarters of Nigeria Prisons Alagbaka,  Akure , the  state capital.

ACG Kasali who said he was in the state on a two-day  official visit  to access the facilities in various prisons across the state,  hinted that  his visit to all the states under his command  has given him ample opportunity to know the challenges confronting the prisons and also make recommendations to the National headquarters in Abuja.

His words, “As a Zonal co-ordinator and Assistant Comptroller of Nigeria Prisons in charge of Ondo,Oyo Ekiti and Osun states’ it is my salutatory duty  to make quarterly visit and inspection of facilities of prisons under my command.

“Since my arrival, I have been inspecting the record books of Ondo State command. And I have been able to access the performances of all officers and men  of the  command in the last four months.

“I have gone round the prisons in the state and I have been able see  the  facilities available  and also  gathered information on areas where there is  infrastructural deficit and make recommendations for appropriate action.

“We visited Akure Medium Prisons at Olokuta and we interacted with the inmates. We have seen the challenges they have and we are going to address them,”he stated.

The ACG  who said the prisons authority is committed to the welfare of its officers and men, added that   the agency is working collaboratively with relevant security agencies and concerned organizations in ensuring that the problem of prisons congestion would be a thing of the past.

According to him, all the measures taken in the course  of the quarterly visits  are for correction ,rehabilitation and reformation of inmates in prisons custody adding that  the prisons authority will continue to do all within its powers in making sure that inmates are taken to court as at when due.

He said his visit has  also afforded  staff of the prisons to lodge their complaints  verbally instead of writing, stressing that all challenges confronting the state command of Nigeria prisons would be properly addressed, just as  he urged the officers ,rank and file to be dedicated in  the discharge of their duties.

He pointed out that with the enactment of Criminal  Justice Act which has been passed  into law by the National Assembly, the issues of delay in criminal justice dispensation, and long detention of inmates without trial would  be a thing of  the past.

ACG Yusuf  who noted that  there are  no more  issues of jail break in the country especially in his zone, attributed the feat on various proactive measures put in place by the agency and also  the necessary synergy existing among security forces.

He used the medium to appreciate  some legal practitioner in the state especially the Legal Aid Council, Non Governmental organizations(NGOs), other stakeholders for assisting the prisons authority in ensuring realisation of  many prisons reforms which include decongestion,  rehabilitation ,speedy dispensation of justice  and welfare of prisons inmates awaiting trial in the  state and Nigeria in general.