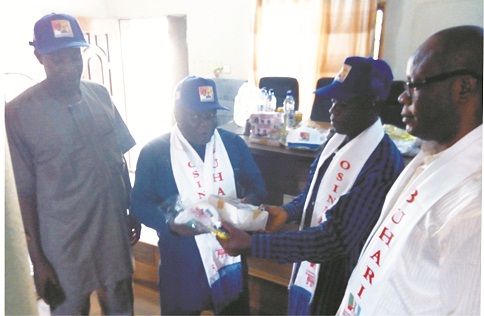 Performing the investiture in Akure, the National Secretary of the group,  Mr  Oyeranmi Adeleye said the choice of Chief Balogun as the group’s national patron was based on his antecedents in grassroots politics, his integrity and passion for the development of the party and the entire nation.

His words: “The choice of Chief Balogun as our patron is not by accident but purely made on merit and participation in grassroots politics. We have looked at his activities in the party too and we believe he righlty qualifies for the position of our  national patron”.

According to Adeleye, CGS, I powered by Alh. Abubakar Malami, the Minister of Justice and Attorney General of the Federation, is a non-money seeking or making political organisation affiliated to APC, aimed at supporting the re-election of President Muhammadu Buhari and VP Yemi Osinbajo for second term.

Also speaking, the Ondo State Coordinator of CGSI, Mr. Gbenga Omotoso said his group  was known for integrity, urging  people at the grassroots to shune vote selling but vote enmass for Buhari/Osinbajo APC candidacy following their antecedents and integrity for a better Nigeria.

Meanwhile, the Chairman of Ondo State Local Government Service Commission  Mr  Femi Idris who graced the occasion alongside other commissioners  in the commission, hailed the group for its conduct and choice of its patron, saying it was a honour well deserved.

While congratulating the newly inaugurated CGSI patron, Idris described him as a peace loving APC loyalist and wished him well in his new endeavour.

He however urged  members of the group to act as agents of development and maintain peace while ensuring that all their efforts are geared towards Buhari/Osinibajo’s victory in the coming general elections.

In his response, the newly decorated CGSI national patron, Moses Balogun thanked the group for the honour  bestowed on  him.

He however appealed to members of the group to be steadfast and maintain the integrity the group is known for so as to help the present administration achieve its set goals and policies for the betterment of the people.

Balogun therefore assured the group that he wouold continue to work relentlessly towards achieving the vision and mission of the group and  ensure that  the Buhari APC led government is re-installed come February 16.