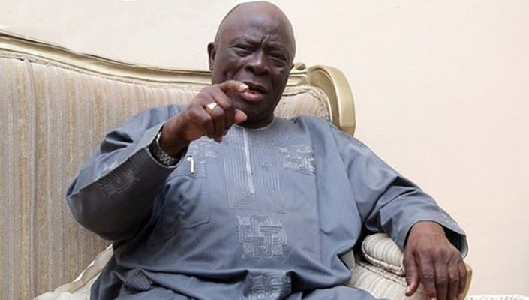 The mudslinging between leaders of Afenifere is getting messier as Chief Ayo Adebanjo called on the Economic and Financial Commission, EFCC, to probe the activities of Chief Bisi Akande and former Lagos State Governor, Asiwaju Bola Tinubu.
Adebanjo fired the salvo yesterday while reacting to Akande’s allegations that Tinubu built a house for him at Lekki in Lagos.

He said that his attention was drawn to the news at the public presentation of the book “MY PARTICIPATION” authored by Chief Bisi Akande and vehemently refuted the claims that he forced Tinubu to build his Lekki home for him.
Adebanjo said that he expected Tinubu himself who was present at the book presentation to have refuted the allegation as he had commended him for his incorruptibility and strength of character during the presentation of his own biography “saying it as it is ” three years ago with further claims that he (Tinubu) would not have been Governor of Lagos State in 1999*.

Adebanjo quizzed “What then could he be demanding from me after his two term governorship to make me pressurize him to build a house for me, when I did not get a naira from him before he became the governor?”
He stated that although there had been calls on him to ignore Akande’s claim, but insisted that he owed a duty to himself and to put the record straight for posterity.
He categorically denied that his house at Lekki was built with his resources through the sale of 3 developed properties, a loan from GTBank and the sale of undeveloped landed property given him by his late leader, Chief Obafemi Awolowo.

He further disclosed that when the interest on the loan became unbearable, he was compelled to sell the undeveloped land given to him by Chief Awolowo in Dide-Olu Estate in Maroko Victoria Island and that one Mr. Ade Otusanya a friend of his son, Femi Ayo-Adebanjo bought the land.

The Afenifere leader gave a list of his properties and invited the Economic and Financial Crimes Commission to verify the stated facts.
He stated that it was alleged that Chief Bisi Akande’s building at Ila-Orogun, and some other properties he has in Lagos and abroad were financed by Bola Tinubu.
He further insinuated that his house in Ibadan was also alleged to have been built by the contractor that built the secretariat in Osogbo, when Akande was the Governor of Osun State.

He thereafter tossed a challenge at Chief Bisi Akande to clear the air by disclosing the source of financing these properties as he did in his press statement.
By the same token, he urged Tinubu whom he described as a ‘great philanthropist to disclose the source of his wealth with which he had bankrolled elections of his party and that of President Muhammadu Buhari.