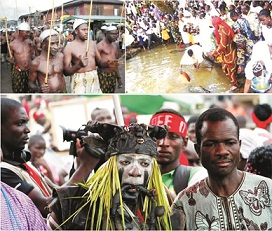 By Theo Adebowale
|
Writing and record keeping have made a lot of difference between cultures. Those that keep record have been consistent and progressive in development. The walls of China, the pyramid of Egypt and the exploits of Israel documented and updated over the ages have portrayed peoples and civilizations of great peculiarities and uncommon feats.

Oral history suffers inferiority because of contradictions and limit of human memory. Historians therefore have a huge task to discharge in their part. Out of ignorance, the system does not seem to recognize the assignment of the historian. Petty jealousies that characterize operations in their clime also serve as distraction to the historian who should help us to unearth the nature and features of our past to determine the direction to progress. The pyramid of Egypt is evidence that there was sophisticated technology in the land in the past millennia.

Military exploits of our forefathers, much as they may sound as fables suggest that our armory had superior weapons adaptable for war or hunting. How did heavy beams climb tens of meters in Egypt? The answer would give a hint on how an African soldier or trader covered hundreds of kilometers within a short time. It was possible before the manufacture of the crane as it was before the steam engine. Honesty and transparency enjoyed a pride of place in the traditional society where a man’s word was his honour.

Leaders consulted with deities regularly to receive instructions, direction and prophecies. In the Yoruba system therefore, the culture embodies traditions resulting from interactions between the people, and between their leaders and their gods. The Olowo, his consort and the gods together give unto Owo people the Igogo festival. In Akure is Ulefunta festival, an annual ceremony similar to Igue festival in Benin. The monarch is on vacation and seclusion evidently to commune with the gods. The Ondo are enthusiastic about Ogun, the god of iron and draw much coverage for protection and preservation.

Osun Osogbo is a goddess of fertility, so is Okebadan of Ibadan. All over the world are festivals celebrated by the people. They derive from their history and experience, customs, totems, symbols, taboos generated around them have helped to build, sustain and improve their civilization. But as the original belief systems are submerged in the fluid of western civilization, contradictions multiply, deceit and hypocrisy get pronounced and governance is miscarried.

Politicians employ support of the gods to secure power. They employ undemocratic practices to get a place in a democracy, give testimony in the church and celebrate their thanksgiving among the congregation. Many of them avoid their constituents except desperate beggars until another election. This path cannot lead to development.

There is need to involve historians, sociologists, anthropologists to play more elaborate part in enacting a democracy that works social interactions that are defined by the norms of the society are more durable, more reliable than artificial regulations alien to their culture. Recent events point to the fact that when the people abandon their culture officially and adopt a foreign culture ostensibly to be foreign culture compliant, a vacuum is created and obtain immediate advantage. So let it be with internet fraudsters and political con men. They started by pilfering artefacts and selling them abroad. Now they swindle individuals and corporate bodies, gather huge sums of money to secure party tickets, sponsor candidates and secure political positions.

They are sworn into offices on the authority of the Bible or the Quran which has no bearing on their lives. Another set goes into the business world wrecking public and private business concerns by flouting terms of agreement, dispossessing investors of their mandate. They seek adjudication, calling the name of the LORD in vain and walking away justified by the legal system alien to their culture meaningless in their tradition. What can save us from this process and system? A comprehensive orientation and enlightenment in our culture and tradition is long overdue. Only men and women that are not ‘too educated’ or born again should qualify for our mandate to govern and represent us. Our officials must be ready to swear by the gods of the land that would not take any nonsense or give a room for repentance. No Yoruba man would be careless to call the name of Sango in vain.

More importantly, there is need for culture revival. The people must be socialized into their culture. There is science in every culture; there is technology in every culture. They should be reinvented in the light of diverse knowledge abounding in various disciplines. It is time to showcase our native implements and skills and explore means of upgrading them within the reality of the moment. There are more than enough mosques and churches in our palaces, traditional rulers should go outside, into the cities to worship and fellowship with their brethren and jamma. Without losing their fundamental right of association and belief, kings should function as custodians of our culture, customs and traditions. They should leave the business of winning souls to competent hands who have so elected to preach the gospel.

From Europe, Asia and America, men and women are trooping in to Nigeria and Africa to learn about the cultures of the people. Traditional rulers should make their resources and persons available for adequate instructions. They should be more concerned about propagating Ifa, Sango, Ogun, Obatala and sundry others. They should promote our system of marriage, dispute adjudication, inheritance, agricultural processes and demonstrate that we have a culture to be proud of, to learn from rather than subverting the African culture. Indeed, the various abnormal cultures particularly in the West place an urgent need for African culture to be on display. The natural laws that complement male and female in other creations are evidently superior to the freedom in the West that endorses homosexuality and bestiality. Writing and record keeping absent in Africa in the beginning should not only be maximized to delve into the past and promote the African glorious heritage, the new media should add great advantage to this in speed and illustration.