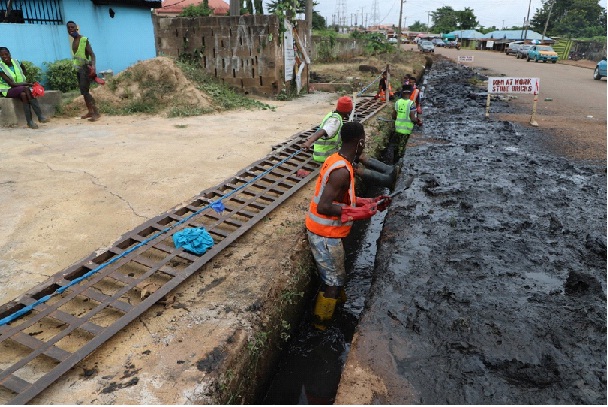 Residents of Akure and Ondo State in general have been charged to cultivate the habit of disposing their waste rightly rather than throwing them into the drain that causes flooding and damage road infrastructure
Ondo State Nigeria Erosion and Watershed Management Project(NEWMAP) Coordinator, Marcus Adewodun gave the charge while monitoring desiltation of some drainages on the major roads in Akure, the Ondo State capital.
He said the State Government through the state Nigeria Erosion and Watershed Management Project (NEWMAP) embarked on the desilting in order to keep the environment clean and prevent flooding as the rainy season is at its peak.
The NEWMAP boss who enjoined agencies of government in charge of environmental management in the state to intensify efforts to curb the menace decried the attitude of those who in the name of construction drop loads of sand and granite on the major roads which in turn go back into the drainages.
Adewodun while commending the contractors handling the job equally urged them to increase the Pace of execution saying being an emergency work, an emergency solution is required considering the rainy period.
While reacting on extending the exercise to other parts of the state, the project coordinator said the state project monitoring unit would look for a way to project it in its future work plan.
According to the NEWMAP boss, the desilting work is expected to cover Fiwasaye roundabout to Agbogbo roundabout, Oba Adesida-Oyemekun Road, Sijuwade/Ala Quarters-Shopprite, Oke-Ijebu, Idanre/Oke-Aro road, Ondo road to army barracks, Elshadai road linking Iyeoma .
Others are, FUTA south gate road, NEPA roundabout – Shopprite, Arakale road, Ondo road and Idanre road.
The Senior Special Assistant to Ondo State Governor on Mobilization, Mr Omotayo Abidakun, who commended the dexterity by which the project is being executed enjoined every good citizen of the state to stop dropping their waste in the drainage for the benefit of all.