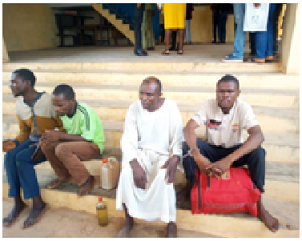 It was  gathered that Adejoh was arrested alongside 53-year-old Celestial Church of Christ cleric, Prophet Olajide Ogunleye in Owo local government area of Ondo state.

Parading the suspects in Akure,the state capital on Wednesday, the State Police Public Relations Officer, Femi Joseph, a Superintendent of Police(SP) said they were arrested following the report by the victim.

Revealing what he intended to do with the stolen pant, Adejoh said the prophet hypnotised him when he visited his church,  adding that he lost consciousness after the  visit.

“I  went to the prophet to pray for me because of my work. When I got there, he asked me my work and I told him I am a Panel Beater. He said he wanted to pray for me asking me to open my hands. He put something on it for me to swalow and prayed for me before leaving the place.

“But when I got home, I didn’t know what I was doing again, I just started looking for my brother wife’s pants and when I got the pants I went back to him. I didn’t steal the pants for rituals.

Hours after, my brother’s wife raised an alarm that she didn’t see her pants and I was arrested. When the police arrested me, I was taken to Uso police station before they transferred me to Akure.

However, Prophet Ogunleye denied the allegation, saying he didn’t ask him to go and steal the pants.

The police image maker, Mr Femi Joseph, however, enjoined ladies and women in the state to guard their underwears.

He said,  “we are using this opportunity to enjoy our ladies and women that this is a very dangerous phenomenon now, we have to guard whatever we are putting on as underwear.