Providing qualitative health at the grassroots 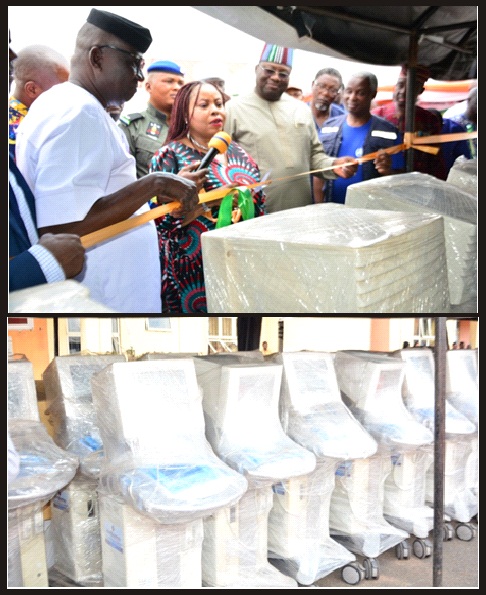 It is the responsibility of government to protect and advance the interest of the society including the delivery of effective health care. The Primary Health Care (PHC)has been a major pillar of the Nigeria health system. It is the health services made available to members of the community at affordable cost. Even though it is being patronised mostly by those at the grassroots, it is important to note that it provides professional medical care for individuals as attested to in Ondo State.

The main role of primary health care is to provide continuous and comprehensive care to the patients. It also helps in making the patient available with the various social welfare and public health services initiated by the concerned governing bodies and other organizations. It also offers quality health and social services to the underprivileged sections of the society.

As for the benefits of primary health care to the members of a community, it offers the first set of professional care to the patients by incorporating a proactive approach that utilizes several preventive measures, management of chronic disease, and promoting self-care. Along with that, primary health care provides increased accessibility to advanced health care system for the community, which results in excellent health outcomes and prevention of delay.

The government of Arakunrin Oluwarotimi Akeredolu of the state is conscious of the mindset that health is wealth hence his mindfulness of its citizens’ health through massive investment in the health sector.

Most government do little or nothing for its PHC but that is not the case in Ondo State no wonder some states in Nigeria have paid several visits to the state to understudy the initiative of its PHC.

The governor had in August 2018 donated equipment including 18 Microscopes, 18 bench Centrifuges, 18 Improved Counting Chambers, 18 Micro – Heamatocentrifuge, 18 Micro – Heamatocrit readers, 36 Glucometers and stripes, 18 Widal test kits, 18 Oxygen Concentrators (with in-built inverters), 18 Oxygen Face Masks and Laboratory Reagents of various types while also in March 2019, there was another phase of equipment distribution for the PHC.

Last Thursday was another epoch making event at the State Primary Health Care Development Agency as Governor Akeredolu commissioned and distributed more equipment for the improvement of PHC in the state.

The event attracted all and sundry, the beneficiary staff were full of joy as they have more equipment to ease their stress. The Agency’s Permanent Secretary, Dr. Francis Akanbiemu just before the commencement of the event, could not hold his joy as he led other staff to dance to the lyrics of the Akure South Cultural Troupe who added glamour to the event.

The different health associations took the front seat at the event so also some traditional rulers who deemed it fit to grace the occasion.

Equipment including 18 high quality digital ultrasound scanning machines with in-built printers, 18 high-tech multi-function colour photocopy machines and 18 petrol(6.8KVA) generators were commissioned and distributed to the 18 Local Government Areas in the State for improvement in the quality of PHC service delivery and utilisation.

Speaking at the commissioning and distribution of the multi million naira equipment, Arakunrin Akeredolu noted that it will significantly help in increasing the quality of maternal and Newborn care, stating it will reduce maternal and prenatal morbidity and mortality.

Akeredolu who explained that government’s passion for the upliftment and realization of sustainable PHC is unparalleled and unprecedented in the history of PHC both in the state and country at large, said that the scanning machine will reduce both cost and transportation of pregnant women accessing such care elsewhere adding that the generators will be useful in powering the equipment and the facilities.

The Governor who was represented by the Secretary to the State Government, Princess Oladunni Odu, charged the Agency to ensure proper training of personnel to handle the equipment which according to him should be handled with care and properly maintained.

However, he reiterated his administration’s resolve in providing qualitative health care delivery to residents of the state.

In his welcome address, Commissioner for Health, Dr. Banji Awolowo Ajaka lamented the level of neglect of PHC’s diagnostic functions in the health care set up in the country which according to him has resulted to lack of trust in the system.

He explained that the present government has set the pace in the provision of standard and qualitative healthcare to residents in line with her REDEEMED agenda for the health sector.

According to him, the Governor developed a Laboratory Strategic Work plan which led to the construction of the first 18 standard laboratories in the state’s PHC facilities which was followed by the distribution of medical equipment for the management of newborn and their mothers.

While stating that the state PHC has become a reference point in the country, he noted that government has employed the highest number of human resources for health in the history of PHC in the state.

In his remarks, Special Adviser on Health, Dr. Francis Faduyile noted that Primary Health Centres are where over 70 percent of the populace are in contact with first care, noting that fortifying the PHC will help in improving health statistics and responsiveness of people in the state.

While stating that a lot of health care facilities in the country are in shambles, he noted that the present government has shown alot of interest in PHC where competent medical personnel have been employed to attend to the health needs of the people.

He thanked the Governor for the gesture and urged medical officers to make good use of the equipment for improved health in the state.

In his goodwill message, Permanent Secretary, OSPHCDA, Dr. Francis Akanbiemu commended the governor, noting that he has brought massive improvement to PHC.

He added that the present administration will continue to do so until PHC becomes the best choice of residents in terms of health delivery in the state.

Also speaking, Permanent Secretary, Ondo State Hospitals Management Board, Dr. Niran Ikuomola lauded the gesture and assured of the board’s willingness to collaborate with the Agency in terms of referrals for health sector strengthening.

Director-General, Ondo State Contributory Health Commission, Dr. Abiodun Oyenehin while stating that the commission will not relent in mobilising resources in ensuring that funds are available for the desired qualitative health care, assured of effective collaboration for an improved health sector.

Speaking on behalf of other developing partners, State Coordinator, WHO, Dr. Dele-David Abidoye congratulated the state for the achievement noting that the organisation and other partners have been working in the state towards integrated service delivery which according to him has led to increase in detection cases.

He described PHC as a good pillar in ensuring that communities improve in the area of health indices.

He pledged the continued support of WHO in PHC revatilisation and other health care needed to conduct in the state.

Abidoye assured that the organisation will give adequate support to the training of personnel to man the equipment.

Adapogun of Ipogun, Oba Rapheal Oluwadare Ojo who described the governor as a passionate man, congratulated the health sector and urged health officials to make judicious use of the equipment for the upliftment of the state.

Should holiday be for skill learning or lesson?