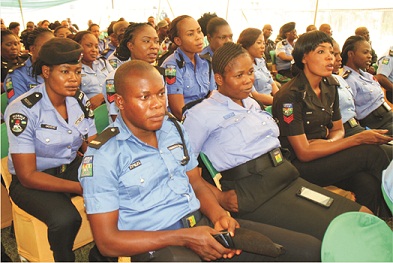 By Micheal Ofulue
|
Apparently disturbed by the upsurge of crime and criminality  in the country , the acting Inspector General of Police, IGP, Mr Mohammed Abubakar Adamu has lunched “Operation Puff Adder” at police headquarters in Abuja to arrest insurgency and banditry  inferno presently burning the country.

The aims and objectives of operation “Puff Adder” was to solve high profile criminal cases such as kidnapping, armed banditry, murders, terrorism and Boko Haram insurgency among other heinous crimes presently tearing the country apart and making Nigerians shiver.

In the history of Nigeria Police Force , every Inspector General of Police  on assumption of  duty  comes up with one operational strategy of combatting crime in the country.

In the era of  IGP  Tafa Balogun  during  ex-president Olusegun Obasanjo’s government, he launched “Operation Fire for Fire” and the operation paid off as it recorded successes in the areas of crime detection, control and prevention in Nigeria.

During Tafa Balogun’s era, armed robbery was the order of the day, but it was curtailed. The operation no doubt brought banditry to the bearest minimum across the nation.

Many Nigerians hailed that operation because it relatively achieved the aims and objectives of which it was established.

His successor, Mr Sunday Ehindero came up with  another  acronym  called “Operation  Serving With Integrity”. His main  aim was to enhance fundamental human rights of the citizenry that were lacking and to stop  indiscriminate misuse of fire arms by the police. Even though the operation was not seen by many to have yielded  fruitful results in the  areas of tackling heinous crimes but  helped  reduced human rights abuses and  encouraged people to know the beauty of democracy which is government of the people.

Subsequent Inspectors General of Police like Mohammed Abubakar, Rafix Rigim, Solomon Arase and  Ibrahim Idris all launched their own operations to tackle crimes and criminality in the country.

On assumption of office by IGP Adamu, the corporate existence of Nigeria as a country was under threat as numerous challenges like kidnapping, abduction, armed robbery, unwholesome activities such as cultism, murder, attacks by Boko Haram majorly  in the  northern region reached crescendo in the country. This prompted him to launch “Operation Puff Adder” which he later directed all state police commands and formations to replicate  in the states.

In Ondo State, the operation   was launched by the State Police Commissioner, Mr Undie Adie and some of the traditional rulers; the Deji of Akure, Oba Aladetoyinbo Ogunlade Aladelusi ,Oba Michael Obatuga, the Jegun of Idepe Kingdom, Oba Francis Adefarakanmi Agbede, the Olowa of Igbara Oke, Olubaka of Okaland, Oba Alhaji Yusuf Adebori Adeleye  and Oba Oluremi Olutoye ,the Alani of Idoani  were at hand to lend helping hands to tame insurgency in Ondo State.

Others present at the ceremony were the Special Assistant to the Governor on Security, Alhaji Jimoh Dojumo, Senior Special Assistant on Special Duties and Strategy, Dr Doyin Adebowale, representatives of youth leaders, student leaders, National Union of Road Transport Workers  officials and other stakeholders in the state.

Addressing the  gathering  on the objectives of the operation, the State Police Commissioner, Adie, promised that the command is determined to stem the rising tide of banditry, armed robbery, kidnapping, cattle rustling and other violent crimes in the state. He warned criminals and their godfathers to stay clear of Ondo State, adding that the police  is poised to check and bring under control all crimes.

According to Undie, “Puff Adder” is all about adopting a new approach in tackling crime by embracing  community policing and using  technology and human intelligence resources to curtail crime in the state. He stated that the police will use the striking forces such as Mobile policemen, Anti-kidnapping officers, Fast Strike, SARS, Anti-cultism Police,  Federal Highway and Safer Highway police to pursue criminals in the state to total submission.

Speaking with The Hope, the Deji of Akure ,Oba Aladetoyinbo Aladelusi and Oba Francis Agbede of Igbara-Oke  lauded the initiative of the IGP Adamu,  saying the operation  would further help to solve crime challenges bedevilling the nation at the moment.

They pledged to support the police in their determination to solve crime related issues  in Ondo State, just as they promised to take the message of the IGP zero tolerance on heinous crime to their subjects being the custodian of customs and traditions in their domains.

The Senior Special Assistant to Ondo State Governor on Security, Alhaji Jimoh Dojumo commended the operation describing it as a right step in a right direction, adding that the state government would continue to assist the police in ensuring that crime is brought to a low level.

Also,  SSA on Special Duties and Strategy to the governor, Dr Doyin Adebowale lauded the operation, saying the whole essence is targeted at fighting  crime and criminality just as he called on relevant stakeholders to support the police with useful information to help tackle crime headlong.

The Assistant Inspector General of Police in charge of Zone 11, Osogbo ,comprising Ondo,  Oyo and Osun States , AIG Adeleye said the police will continue  to adopt suitable contemporary technologies like the use of mobile networks and vehicles tracking devices to tackle the issue of armed robbery and kidnapping in Ondo State.

He said the zone has adopted tripod of problem solving: community policing, partnership with other security agents and organizational transformation which are the essentials of policing methodology.

He revealed that zonal security stakeholders forum would soon be inaugurated and representative of the three state governors will be among the critical stakeholders sharing intelligence information on crime management in the zone.

The Police boss  said that the effectiveness of the operation would be determined by the sincerity on the part of the police by being responsive and timely to information passed to them.

He called on stakeholders to partner the police in combating crime in the state stressing that  effective  crime bursting is for all and sundry and not for the security agencies alone.

Meanwhile, operation “Puff Adder” has recorded first feat as some culprits numbering seventeen were picked up at different hideouts in the state  over  crimes such  as  kidnapping, murder, armed robbery in the state.

The state Police Commissioner, Undie Adie called on all other criminals to leave the state in their own interest, failure which they would face the full wrath of the law.

Empower yourselves through SAP, youths charged