Quadri to get new kits sponsor 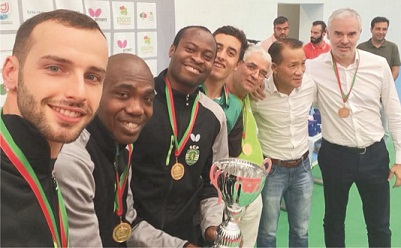 Quadri to get new kits sponsor

By Femi Atolagbe
|
There are strong indications that African Champion, Aruna Quadri of Nigeria will be parting ways with Joola for a new kits sponsor soon.

Quadri was signed by Joola in 2009 and the Nigerian has kept faith with the Germany-based firm.

From top 300 in the world ranking in 2009 when Joola decided to add the first African player into his fold, Quadri has improved the fortune of the firm in Africa with his rise to the top 23 in the world.

At present, Aruna Quadri remains the biggest super star in the fold of Joola ahead of top Asians and Europeans signed by the company.

Aruna Quadri’s popularity across the globe has also rubbed off on the fortune of Joola to become one of the top three kits firms in table tennis globally.

In few weeks, the waiting game may be over as the Nigerian will be making known his new kits sponsor

At the weekend in Portugal, Aruna Quadri and Bode Abiodum claimed the fourth national men’s table tennis title with Sporting after beating Sao Roque CD 3-0 in the second leg of the play-off final held at the Multipurpose Room of the Stadium of Alvalade in Lisbon.

Since joining the Lisbon-based team, Quadri has been making it to the podium in the Portuguese elite league alongside his compatriot – Abiodun and this becomes his fourth consecutive title with the Portuguese champion.

At the weekend, Quadri was in action for the team when they defeated their opponent 3-0 in the second leg played on Friday May 17 after a narrow 3-2 win in the first leg of the play-off final played on Wednesday May 14.

In the first leg Sporting beat CD São Roque (STAG) 3-2 in the first game of the Play-off Final of the Men’s National Championship of the 1st Division held in Madeira to have an edge going into the second leg.

The first leg lasted for more than three hours, with home team – CD Sao Rome could not get their rhythm in the doubles match involving Nuno Henriques and Tiago Li against Sporting Aruna Quadri and Diogo Carvalho as they were losing 2-0, but they recovered and ended up winning by 3-2 ((5-11, 5-11, 12-10, 11-8 , 11-4), putting the result in 1-0 for the home team.