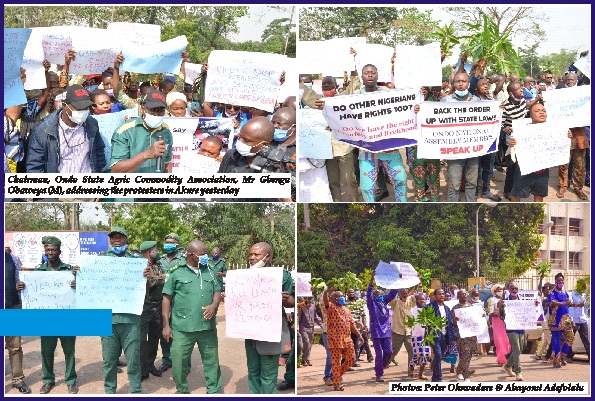 Protests and condemnations have continued to trail the Presidency over its stand on the ultimatum handed down to herdsmen to quit the forest reserves of Ondo State.
The protesters who trooped out in huge numbers yesterday expressed solidarity with the State governor, Arakunrin Oluwarotimi Akeredolu on his marching orders to criminals masquerading as herders.
The various groups converged on the Governor’s Office to register their support for what they described as Governor Akeredolu’s laudable and right step aimed at stemming the tide of insecurity in the state.
The groups who demonstrated their anger over incessant abduction and killing of innocent citizens by the herders also described the response of the presidency to Governor Akeredolu’s action as “provocative, uncalled for and condemnable”.
Speaking at the solidarity rally, the state chairman of Ondo State Agric Commodity Association, OSACA, an umbrella body for all agricultural value chain and farmers’ groups in the state, Mr Gbenga Obaweya, expressed their full support for the order of the Governor calling herdsmen to vacate all Forest Reserves as well as banning night, under aged grazing and movement of cattle in cities and highways.
Obaweya particularly called on the State House of Assembly to back up the order with relevant legislation as a matter of urgency, adding that the Grazing Bill before the Assembly should be given accelerated passage.
He explained that the Governor’s order has brought lots of hope to farmers in the state as activities of herders who have turned the forests into unlawful activities, while farmers are no longer safe to do their legitimate business.
The OSACA chairman disclosed that if not quickly checked, the nefarious activities of herdsmen could lead to severe famine, civil war and pauperised farmers.
How my wife was raped to death- rice farmer narrates ordeal
At the rally, a rice farmer and palm producer, from Kasemola in Ogbese, community, Mr Ishola Olatunji, went emotional as he narrated how his wife was raped by a herdsman on their farm.
“My wife was picking palm fruit in our farm and one of the Fulani herdsmen came around and said Baba is not in the farm. So, he wanted to rape her but madam tried to convince him that she would give him water to drink but the herdsman refused.
“He insisted on raping her. My daughter was also with her. Madam asked him why would you rape me? But the Fulani herdsman insisted on raping her which he eventually did. After raping her, he took away her machete which she was using to pick the palm fruit.
“When I came back, we tried to find the herdsman but we couldn’t locate him. We were told he has gone to another area.
My wife later fell sick and she died after two days, and I have since buried her”, he narrated.
He also said just last week the herdsmen still went to his farm and set it on fire.
On his part, Ehinmetan Raphael, a senior Forest Guard official, decried incessant attacks and kidnaping of their members in the Forest Reserves, just as he lauded the state Governor for the recent step taken to address the insecurity in the state.
A Director in charge of Plantation in the state, Saba Vincent said over 50,000 hectares of their plantation at Ijugbere, as well as Cocoa plantation have been taken over by the herdsmen who chased the farmers away from the multimillion naira farm.
In his remarks, the state chairman of the NURTW, Jacob Adebo who led other members of the union on solidarity protest, said many of his members have been kidnaped with ransom paid, while many killed by the herders.
Addressing the protesters, the Secretary to the State Government, SSG, Tayo Oluwatuyi, applauded them for their peaceful conduct with a promise that government would not fold its arms and allow innocent people to suffer without taking appropriate and legal steps.
He said the governor has every right to protect, secure the lives of the people of the state, adding that Governor Akeredolu was firm in his recent action and there was no going back.
The SSG assured the people that everybody is in support of Governor Akeredolu’s action because he is standing by his people.
Meanwhile, traditional rulers in Ondo state have thrown their weight behind Governor Oluwarotimi Akeredolu’s tough directive asking all unregistered herdsmen to vacate government forest reserves in the state.
The traditional rulers while briefing journalists at the end of an emergency meeting held at the Cocoa Conference Hall of the Governor’s Office, Alagbaka, Akure, equally called on President Muhammadu Buhari “to show the world that he is the father of all irrespective of ethnic affiliation”.
The Olukare of Ikare, Oba Akadiri Momoh who spoke on behalf of other monarchs, called on the President to caution his aides to always exercise restraints on issues that border on insecurity in the country.
The monarchs urged other Governors in the South West and the South West caucus in the National Assembly as well as all State Houses of Assembly to rise up to the occasion through constitutional means to rein in the rampaging criminals masquerading as herdsmen across the South West.
“We condemn in totality, the deliberate attempt by some persons to twist the Governor’s clear directive in respect of Government Forest Reserves that Fulanis have been asked to leave our state.
“Fulanis like any other ethnic groups, are free to live and conduct their legitimate businesses anywhere in the country, including Ondo state, while respecting the private property rights of the people. It is to be noted that even the indigenes of Ondo state do not have right to use the Forest Reserves without due authorization”, they said.