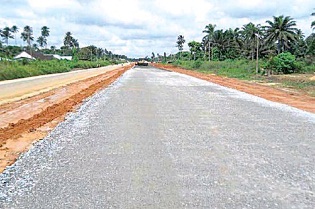 By Kehinde Oluwatayo
|
Ondo state government has concluded plans to construct about 60km rural roads  under the Rural Access and Agricultural Marketing Programme (RAAMP) in the state.

Special Adviser to the state Governor on Rural and Community Development, Mr. Victor Olabimtan disclosed this during an inspection tour of some selected roads in some communities in the state.

According to a statement by the Communication Officer of RAAMP, Mr Martins Ayenitaju, Olabimtan said 20km of the roads carefully selected for immediate intervention will be constructed per senatorial district in the first phase.

He noted that the roads when completed will ease movement of farm produce to the market and disclosed that the survey and the preliminary design of the roads is completed.

He said the job will be done through a competitive bidding process in line with the World bank procurement guideline.

While saying that the step will keep the hope of the people alive while waiting for financial effectiveness of RAAMP, Olabimtan stressed that it will proffer solution to some of the problems being faced by people in the rural communities as a result of poor access to their farmland.

He said government is committed to providing accessible roads and agro- logistics hubs in rural communities in order to boost agricultural development in the state.