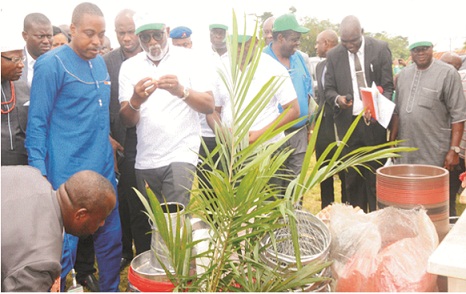 By Ilemobola Michael
|
The taste of the pudding is in the eating. In the same way, a responsible leader can be measured by the number of people his policies and programmes are able to bail out from the pang of hunger and wants.

Armed with the above axiom, Governor Oluwarotimi Akeredolu, SAN, of Ondo State, since assuming office, has   initiated not a few life-changing agricultural policies and programmes to positively impact the lives of the people of the state. Such policies were carefully designed to tackle the issue of unemployment among the teaming youths, with the sole aim of making them job and wealth creators, as well as employers of labour.

Akeredolu, who was miffed by the current economic challenges, including the rising joblessness among youths in the country, saw the need to encourage the young citizens to embrace agriculture as a practicable way out of the ugly situation.

The governor promised the need to explore the advantages derivable from agriculture during the inauguration of his government in February 2017. He then made investment in the sector one of the central focus of his administration.

In achieving the benefits of the initiatives, the current Ondo State governor rolled out numerous implementable programmes for the purpose. He viewed the programmes as statutory obligation meant to provide security and promote welfare of the people, especially, youths, who have been referred to as the “strength of the nation” by stakeholders in many fora.

First, the governor collaborated with Federal Government on national egg production scheme with 64,000 layers. No fewer than 32 farmers are currently participating in the programme. The state government equally procured and distributed 1,000 metric tons of fertilizer to various farm service centres in the state with the sole aim to improve food production.

Also, the state government engaged 18,000 youths across the 18 local government areas of the state to pilot the current administration’s “Youth on Ridges the Programme.” The scheme, according to the government, is meant to encourage the young able boys and girls to return to farming.

As part of the efforts to achieve the objective, the state government trained over 2,500 youths on Cassava Value Addition. It also rehabilitated Isuada Agro Business Centre where 5,000 layers are currently being raised.

The governor’s seriousness and irrevocable commitment to the development of agriculture recently caught the attention of interested investors who partnered with the government to create wealth and a new generation of employers of labour in the state. Such investors include DAWN Commission on rice production and NNPC Cassava Ethanol Project, among others.

In spite of the fact that the current administration inherited huge debt from its immediate predecessor, Akeredolu approved N2 billion Commercial Agricultural Credit Scheme for land clearing and establishment of more cash crops like cashew, oil palm and other three crops across the three senatorial districts of the state.

This was beside the N1.5 billion recently approved by the State Executive Council for agricultural value chain development with emphasis on job creation for the youths.

For his administration’s self-sufficiency in food production drive, Governor Akeredolu aligned with the popular belief that modern agricultural practice requires the use of machineries. As a result, he therefore set up three agricultural equipment hiring centres in three principal towns of Akure, Ondo and Owo respectively. This is enable interested farmers to engage in mechanized farming.

Rice growers too were also given prominent consideration in the scheme of things, as the governor established five tons/day rice mill at Ogbese in Akure North Local Government Area of the state under the auspices of the Federated Fadama Community Association.

For being convinced of the willingness demonstrated by the people to embrace agriculture for productive purposes, the governor recently handed over N15 million loan, being the first tranche, to the agriculture commodities association in the state. This is to enable them to expand their

He equally facilitated the establishment of Ondo State Farmers Micro-Finance Bank for which his administration had released N20 million.

Before petroleum was discovered in commercial quantity in Nigeria, the country, for many decades, relied heavily on the revenue generated from cash crops, such as cocoa, palm oil and groundnut. It has yet to be disputed that the revenue generated from such tree crops were used by the Nigerian Government to provide infrastructure and other social services across the country.

With the discovery of oil, the Federal Government’s attention shifted to the exploration of petroleum. This led to negligence of the agricultural sector.

But Akeredolu has moved to return Nigeria, particularly, Ondo State to the good old days when agriculture was the mainstay of the economy. He has therefore established a modern agricultural village at Jugbere with phased establishment of 2,000 hectares of cocoa farm to be plotted on four-hectare basis for youth empowerment and boost cocoa production in the state.

He also raised and distributed 500,000 cocoa and 25,000 cashew seedlings to farmers to further boost cocoa and cashew production. This was in addition to plan to raise additional 100,000 cocoa seedlings for year 2019 planting season.

A public affairs analyst, Mr. Jacob Jayeola, viewed the governor’s agricultural programmes as the right things to do, especially when Nigeria is perceived in many quarters to have sat on gun powder because of the daily increase in the number of its unemployed youths.

Jayeola is of the opinion that with adequate supervision, Akeredolu’s dream of putting Ondo State on the path of achieving self-sufficiency in food production is achievable.

He said: “I have seen hundreds of youths showing interest in agriculture. Kudos to Governor Akeredolu for realizing that economy of the country and Ondo State in particular can be boosted through agriculture. The governor is not only preaching it; he is also demonstrating it by encouraging the young citizens to consider the long-neglected sector as a practical way to tackle joblessness and poverty.”

Two of the participants in the “Youths on the Ridges Programme” Kolade Ajibola and Kikelomo Olaiya, seem to have discovered the treasure hidden in agriculture.

Ajibola, who is now a full-time farmer, said he embraced agriculture following the training he received from OSAEC, an intervention agency of the state government.

“I see myself becoming a millionaire and employer of labour in no distant future. Agriculture is the only way for me to achieve my dream to fighting and defeating poverty in my life,” he said.

Olaiya’s plan is to be celebrated as the youngest woman millionaire chicken farmer, as she may soon find it difficult to meet her customers’ demand for eggs.

According to her, the sure-footed plans put in place by the governor to develop agricultural sector in Ondo State is already yielding fantastic fruits.

She said: “When a blacksmith is repeatedly heating a particular piece of wrought iron or steel, he is poised to fashion out a desired shape from the object. So, when Akeredolu was continually telling the people of Ondo State that one could become a successful person through agriculture, the governor was mainly telling the youths to wake up and face reality.

“I can confidently say that I am now a young farmer with a promising future. Thanks to Akeredolu for bringing us back to the sector long neglected. I see myself becoming the most successful youngest woman farmer soonest.”