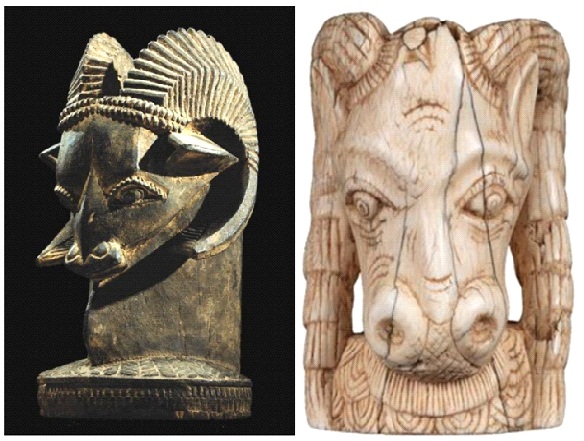 Owo kingdom appreciates the intrinsic values of her cultural tradition and art works before European civilization came. The revolutionary trend of socio-political history of Owo, since 12th century by her large size accommodated many strangers and immigrants whose social religious and artistic traditions were of great influence.
Owo a quite city of honour and dignity, which is equidistant from lle-ife and Benin city is favoured by climatic conditions which in terms favour her agricultural products which in turns flourish her art works.
Because Owo is situated midway from with the two ancient towns Ife and Benin respectively, it shares the same cultural values
Ram head is known to be an alter carving in Owo kingdom, in Ondo State. This art is holistic in dimension. This religious art is represented by ancestral ram head (Orisa-ma-sin-mi) (Deity do nut bury me). It is generally known as (Ori-Agbo) and her elaborated panels are part of Owo arts.
The Olowo of Owo, Ojomo of Ijebu-Owo, high ranking chiefs and selected princely chiefs in Owo maintain this ancestral alter in their chieftaincy houses.
Ram head in ancestral shrine in Owo is for cultural co-existence. It (Orisa-ma-sin-mi) is used also by royal chiefs in Ile-Ife, this town occupies the place of precursor to other towns. However, this resemblance has shown that ram head is widely used in Ile lfe, Benin and its environs.
It is one of the items for personal adornment which is present in art work of the three towns but prominent in Owo. Ram blood is as pure as human blood which scientifically gives way for its uniqueness in sacrifice for ritual purposes.
According to Redfard Donald in apaper titled, “Ancient gods and religion”, he said the most famous ancient account of ram involved in the old testament was when Abraham found ram trapped by its horns at Moriah where he had gone to sacrifice his only son Isaac.
Kawl Mysliwce observed that ram head signifies purified blood that has the potency to reenact life in social life, provides insatiable needs. That is why Muslim kill ram.
Alternatively, ram skin is used in some society as footmat for Obas or high-chiefs when paying homage to them.
The first major archaeological excavation conducted in Owo Ugbaja by Prof. Ekpo Eyo confirmed that the grove around the site of Ugbolaja had been serving as animal ritual spot where rites of Oronsin were performed. Excavated ritual objects were found such as ram head, cock, beady hand etc, which showed that high chief or royal performed the rituals.
Ram head plays the role of intermediaries between man (Worshippers) and their celestial ancestors in order to keep them alive.
Ram head relates to Ori-eleda, Aseda, Ayanmo, destiny, the creator. In societal norms, head determines what a person will achieve, acquire prosperity in a life time, which brings the adage in Yoruba (Ibi ti ori nlo ki ese sin ni lo).
Ram because of it war-like attributes is helping to uphold the kingship institution in Owo. Presence of ram head either the horn or image (carved object) on the alter or shrine is to appease the gods to increase victory in all stratifications of life.
The Mende and Karman observe ram as temple animal because of its pure blood like that of a man. This applies to the high ranking chieftaincy titles or royal holders that instead of killing man as sacrificial lamb, ram is used as alternative which upholds a power of authority and the people’s rules. Throughout history, ram , Orisa-ma-sin-mi has been seen as an important mythological and religious concept associated with ancient foes all over the world. Ram became a symbol of Christ in the ancient days which he suffered from religious being.
Historically, Turkish values animal figure, especially ram as altar and sacrificial figure, because they view it as it preserves people from evil eye via communicating with ancestor, thus bring luck, flourish them, mythological ancient people worshipped animals as gods symbolically.
Ram head has been found in ancient Neolithic shrine in ancient Turkey. It possesses a celestial trouts, meaning, sees beyond man imagination (see afar) hence it doesn’t imbibe evil spirits.
Ram symbolically is an alter figure that brings cultural co-existence between communities whereby they shared their cultural affinities as well make a sustainable society.
This cultural flow among Benin, Ife and Owo kingdom through altars show wide understanding that there is no discrimination in the usage of ram head as a sacrificial item to personal gods till date.
Ram head is found or put on individual shrine to intercede ,such as Ikenga, Leopard, objects are found on shrines.
Observing terracotta arts in Owo kingdom always see a beaded hand carrying ram head or lizard, especially the excavated one from Lugbolaja which is on display in Owo exhibition hall; this shows the efficacy of usage of this animal in cultural and religious aspect of Owo. Owo people cherish ram head during Igogo festival

Importance of effigy in burial ceremony in Owo