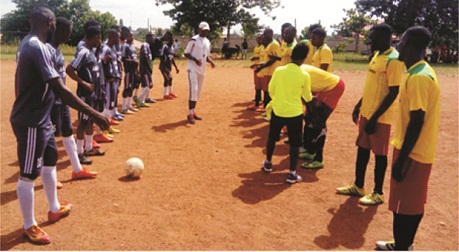 By Femi Atolagbe
|
The rivalry between the Snippers FC and Ages FC  tagged South Africa and Zambia respectively for the purpose of the ongoing Ramadan “Nations” Cup will be renewed today as what the football enthusiasts around the venue regarded as Ijapo derby.

The aforementioned clubs are the only two teams using  Ijapo Housing field as their home ground that are participating in the ongoing competition .

The last meeting between the duo was during the last Easter super cup, where  Ages FC (Zambia) defeated Snipers FC (South Africa ) in the preliminary stage 1-0 and later knocked them out in the final via penalty shootout to lift the Trophy.

Fans and football enthusiasts are patiently waiting to see what the score line would look like today .

It was said that the competitions were put together to promote and develop of football at the grassroots. To also keep the youths off the social vices during and after Ramadan.

The Ijapo derby is promised to be an entertaining encounter as both teams promised to display  their football artistry to the delight of the spectators.