Home In Our Neigbourhood Randy pastor caught pants down! 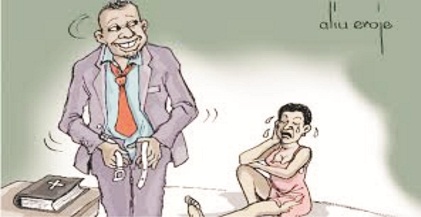 With Sunmola Olowookere
|
A pastor’s honour has taken a tumble in the dust and no matter how much he tries to clean up after himself, no matter the level of damage control carried out by his wife, the scandal of the randy pastor who gets his kicks out of frisking little girls had leaked like smelly sewage water into the neighbourhood, and it stank to high heavens.

He was the husband to the owner of the church; a thriving prophetic ministry in our neighbourhood. Due to Nigeria’s religious nature, their programmes were always filled to capacity.

His wife who was the owner of the ministry made him a cofounder. By virtue of that, he was ordained a pastor. However, to be honest, he never lay claim to having any calling or anointing.

He was never put in charge of any programme or asked to deliver a sermon. Evidently, his wife knew him and his limitations. He was majorly in charge of administration and finance.

Though the wife sometimes hear complaints from people how her husband shortchanged them in business dealings in the church and have strong suspicions that her husband was stealing the church blind, yet she wisely held her peace.

She was very careful with him because she was afraid of it becoming public knowledge should she confront him.

The whole neighbourhood knew her as a prophetess with accurate gift of vision and many people go to her for counseling and to enquire about their future. Some go to her to seek solutions to their spiritual physical problems.

She prepares special soap and sponge for those that their problems required taking spiritual birth and cleansing. In our neighbourhood, the church was a Mecca of sorts and it made the area popular as people come from fair and near for programmes at the church.

The place was always filled with people. While some are coming and going, others are there for a prescribed stay in the church. There were food sellers on the premises so it was comfortable for those staying there.

Some of the church workers had moved permanently to the church premises as there were available rooms in the mission house. The environment always bubbled. Prayer programmes were like carnivals.

The ministry boomed and thrived. Things were moving ever so smoothly until the devil reared its ugly head.

Among the occupants of the mission house was a chubby and beautiful girl who caught the eye of the pastor. The girl, Afusat was placed under deliverance session from the spirit of ogbanje.

He had been eyeing the girl for a while looking for an opening or should rather an opportunity to satisfy his sexual desires through her.

He was sex starved as his wife had refused him sex. For some years, before then the prophetess had told him that the lord told her not to have sexual relations with any man.

So no matter how much he tried, the prophetess never allowed him to touch her.

One day, opportunity presented itself as the mission house was almost deserted. He called the girl to his room purportedly to send her on an errand.

He was adamant and he refused to listen to her. His eyes were glazed with desire as he pinned the girl down to the bed while fondling with his trousers.

The girl who grew alarmed was by then crying and could not wriggle free as he had overpowered her. But as fate would have it, she was saved by the arrival of the wife.

She was standing by the window having been attracted by sounds of scuttle inside  and heard all that transpired inside.

“Daddy! Open the door now”. He grew still. ” but she travelled along with some of her ministers, what is she doing back here?” I am ashamed of you. He wondered puzzled.

His heart sank and he got up with his heart in his mouth and went to open the door.

As soon as he opened the door to the wife, the girl ran out like a scared rabbit. The wife was livid “why are you doing this? You want to rape a member of the church, don’t you care what the outcome would be should the news break?”

She sighed heavily as the anger left her body. “Thank God, the evil incident was averted. No wonder I did not feel like going again”. she thought with relief. Her husband averted his face as she rebuked him.

The prophetess did it to cover her husband’s track and to avert a future reoccurrence.

however, the family of the young girl who had been briefed by what transpired were mitted. Why should their daughter be the scape goat after almost being raped?

They spread the scandal all over the neighourbood Indeed, the gospel mill has a very busy period.