Reaching perfection of our existence

by The Editor
in Book review
0 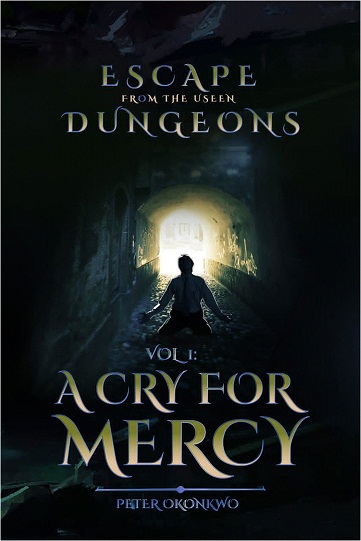 Book: A Cry for Mercy (Escape From The Unseen Dungeons vol. 1)

The book, a cry for mercy, is an anthropology of poems that rings with pangs of a burdened soul seeking help for achieving its liberation and freedom. The collection  contains 23 poems that speak of human struggle to achieve perfection in their daily lives.

The author, before foraging into the world of uncertainties that besiege our lives, the desires and aspirations that our hearts long for, asked these soul searching questions “Is Spiritual bondage real? Are our lives a reflection  of what happens to our spirit beings? Are we indeed mere pencils in the hands of a creator?

“Can we ever find answers to our questions, or understand the incomprehensible things that tie a man down and do not allow him to match into his glory?

“Oh! That we can just be granted a glimpse into  heaven and be allowed to converse with the powers that govern the affairs of men.”

With pathos, Okonkwo portrays  other worldly happenings that might be responsible for the upheaval in our life experiences; fleeting joy today, overwhelming woes by the next day. He wonders if such supernatural events raised in his questions might not be part of factors that shape what we experience in our lives.

This genre opens with an heartfelt lamentation of a soul seeking succour and deliverance from a divine source. The emotion at play in this poem and all through the collection is reminiscent of the yearnings of the psalmist in his pleas for mercy and divine intervention.

He assures the one whose pleasure he awaits  about his constancy in the “waiting room of expectation” . To the recipient of his petitions, he tells of his abject helplessness in controlling the events in his life and the desperate longing to have his prayers answered.

In the throes of his dejection, he, however, expresses hope for liberation, deliverance and freedom from all the encumbrances, despite the debilitating situation that abounds around him at the present time.

In the second poem, he seems not to remember his hopes at the tail end of the first poem, as he wonders how long he would have to wait before his expectations are met.

His hopes are buffeted by the pebbles of obstacles thrown at him on his journey to freedom and this has made the winds to be taken out of his sails.

He seems to have put aside all hopes and expectations in his casting down. He appears inconsolable as he wonders how much longer he would have to wait for the manifestation of his expectations,

Despair and despondency are becoming familiar emotions that have taken a permanent abode in his heart as his challenges persist with a frightening resolution that mocks his struggle for deliverance.

In the third poem, he shares his “longing for help”. The poet lists all the areas in which the subject needs help. Here, we hear a voice of rebellion against the tyranny of the forces that control the universe as he puts forward a complaint of how long he had longed for help with his eyes fixed on the source from where he expected help.

In the fourth poem, he began to suspect that the cruel hand of some fairy must be behind his tale of woe. Although he did mention fate only in some few instances, however, it is only cruel fate that comes to mind when one thinks of whom to heap blames on for our misfortunes and delayed expectations.

He describes a soul wallowing in abject misery and confusion. The man had done all he could, embarked on myriads of spiritual and self liberating exercise, all to no avail.

He seemed to be at the end of his tether, yet he could not stay still, for there was something he still desired from the Supreme deity and he could not continue living in the way he had been living presently.

The sentiment showcased here is the replica of what many people go through in their daily lives as they strive to live a better life.

The fifth chapter shows a soul at war with the weaknesses of his flesh. Like the biblical Paul who wondered who would save him from his flesh, the subject here is also at odds with some of the traits he manifests.

However, these sentiments can only be experienced when one desires a life of distinction and to be at one with the divine order of perfection. As he inches towards holiness, his untoward behaviour becomes abhorrent to him.

Alas! He seemed to have made peace with his base self in the sixth chapter. The divine aspirations seemed to have been put in abeyance, as he accepted that he could no longer war with the demands of the flesh.

Struggling with one’s flesh can be draining and the smallest success is no mean feat. Hence, there may be a sense of peace of letting go of the struggle and letting oneself be carried away with the flow.

One aspect that resonates all through the collection is that the poet always allows the subject matter to come to the consciousness of seeking help and succour, no matter the level of despondency.

In the seventh poem, we see a contrite heart seeking to make atonement for wrongful actions. Like a pig that had frolicked in the mud, he seeks forgiveness for his stint in the mud at the moment frivolity took over his senses.

From the sentiments shared in the next two poems, he seemed to have lost royally to the dictates of his flesh and now seeks to right the wrongs.

However, he seemed to be aware of his princely state with the Supreme deity, as he petitioned for forgiveness and to be reinstated with the confidence of one whose sins had been atoned for by a compassionate solicitor.

After gaining confidence, following the righting of his misdeeds, he boldly engaged the obstacles in his path by asking it some questions which he described as “gnarly”. The subject matter seems bent on giving as good as he got. Gnarly means twisted and knotty. Since the obstacles on his path are not taking it easy with him, he too is ready for a steamy confrontation with them.

In the remaining poems, the poet seeks favour from the source of his sustenance and in the same vein , he wants to ascertain  why he is still at his lowest ebb. He wonders whether it is his fault or the cruel hands of fate at work in his life.

All the pointers seem to be telling him that his time of his glorification has not come. Like the average Nigerian would say “God! When?”.

All the stanzas of this collection of poems are fraught with deep emotions of fear, sadness, despondency and tired expectations.

Till the very bitter end, there seems to be no light at the end of the tunnel for him, as he battles with depression and suicidal thoughts. The reprieve he got, if he got any, seems to be far in between.

Here is a soul yearning for a much awaited life-liberating visitation, a lifting out of the miry obstacles that dotted his path and a glorification, despite all the impediments he is inundated with.

The work is a spiritual exercise that identifies with the daily struggle and strife of a soul seeking oneness with God and asking to be favoured by the universe in their daily  pursuits.

In all the stanzas, he pours out raw emotions that draw at the heartstrings in a bid to drive home his message.

This collection of poems by this young and promising man, Peter Okonkwo, is effortlessly fluid, as the poet writes with refreshing clarity that engages the reader, compared to the mendacity and complexity associated with some poets of yester years.