Reasons for decline in cocoa production 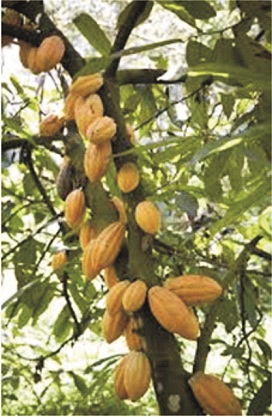 Reasons for decline in cocoa production

By Adetokunbo Abiola
|
These are trying times for cocoa farmers in the country.

Meanwhile, a new study has determined that the production of cocoa is one of the factors fuelling the current global climate change.

However, aware of the decline in the production of cocoa, the head of state, President Muhhammadu Buhari, said the situation is unacceptable.

In 1880, a cocoa farm was established in Lagos. Thereafter, the planting of the tree expanded in Western Nigeria. Farmers in Ibadan and Egba land began experimenting with planting cocoa in uncultivated forests in 1890 and those in Ilesa started around 1896.

The planting of cocoa later spread to Okeigbo and Ondo, both in Ondo State; Ife and Gbongan in Osun State and also in Ekitiland. As time passed by, the game changed, and Nigeria became one of the largest producers of cocoa in the world, with the major areas of production being Ondo, Cross River, Ogun, Akwa Ibom, Edo, Ekiti, Delta, Osun and Oyo.

But then, hard times fell on the industry, and lots of stakeholders are cracking their heads, strategizing about how to find the way out.

According to experts, the reason for the decline is the unfavorable weather conditions that stalled production in major growing countries. The El Nino weather pattern in 2015/16 left a bitter taste for producers, as it shrank output and damaged crops.

Says one expert, “While political concerns in West Africa and fluctuations of the U.S. dollar can have a major effect in the price of cocoa, weather conditions in Ivory Coast (N1 world cocoa producer), Ghana and Indonesia are at least just as important. Two years of back-to-back La Nino events (cool ocean currents off the coast of South America and low pressure over Darwin, Australia) has resulted in above-normal world production and one key reason for cocoa prices to fall some 30% or so from their highs.

There are also mounting concerns that cocoa farmers are migrating to other industries like mining and rubber production due to higher profits. The supply shortfall forced chocolate companies around the world to find alternative ways to have stable and predictable supply.

The Cocoa Farmers Association of Nigeria blame the way the government handles the crop. They allege that the attitude of the government towards bringing back the old glory of cocoa farming and business in the country is not encouraging.

Some allege that some of the input used for the production of cocoa do more harm than good to the crop, particularly fungicide, which they say destroys cocoa trees and farms.

Similarly, others describe transportation as a serious challenge facing cocoa farmers, as they can’t evacuate their products in the absence of a good road networks in cocoa-growing areas.

But the Buhari administration has also said that it is making efforts to revitalise the sector. It has  inaugurated a committee on the re-launch of cocoa programmes to ensure that the country moves from its current position in world cocoa production to the number one position.

The Minister of Industry, Trade and Investment, Dr. Okechukwu Enelamah, also recently appealed to development partners and stakeholders in cocoa farming to join hands with the Federal Government to revitalise cocoa production.

At the first International Cocoa Summit held in Abuja, with the theme,’ Cocoa, A Strategic Commodity for National Economic Development’, he said the government wanted to come up with an action plan to boost cocoa revolution as part of the effort to diversify the economy.

Expressing the hope that foreign and domestic consumption of cocoa would make a lot of difference, he said, “It’s a source of medicine to health challenges such as diabetes, cancer and high blood pressure.”

A report indicated that the minister called on cocoa farmers to avail themselves of the new technologies and innovation available to improve their products to be able to compete at both local and international markets.

“There is a new dawn now for partnership and support to revive its lost glory,” Enelamah said.

Analysts note that cocoa prices in the international market had risen but that supply would be a major challenge for producers in the coming years due to increasing demand.

While there is hope that cocoa production may increase, a new study shows things might not be so smooth.

According to  Food Research International, researchers from the University of Manchester in the UK assessed the impact of ingredients, manufacturing processes, packaging and waste to climate change.

The study estimates that the UK chocolate industry produces about 2.1 million tonnes of greenhouse gases a year.

This is equivalent to the annual emissions of the whole population of a city as large as Belfast.

It also found that it takes around 1,000 litres of water to produce just one chocolate bar.

It also found that the raw materials used to produce chocolate as well as the packaging are the major environmental hotspot.

The impact from the ingredients are mainly due to milk powder, cocoa derivatives, sugar and palm oil. In other words, even though demand for chocolates may rise, concerns on climate change may prove counter-productive, which might lead to a backlash in the cocoa market in the next few years.

The issue about cocoa will prove controversial in the coming years.