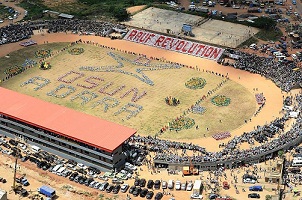 Fisayo Akinduro, Osogbo
|
The management of the Osun state owned teams have been charged to ensure that the clubs are rebranded holistically in order to justify government’s huge investment in sports.

Commissioner for Youth and Sports Development, Mr Yemi Lawal stated this while hosting management boards of Osun United and Osun Babes football clubs during a courtesy call to his office.

He assured the people particularly sports lovers that the present administration will focus more on investment in sports by  making the state teams revenue generating agencies.

Lawal, who submitted that Osun is well blessed with gifted and talented athletes said efforts should be made to catch them young from schools and nurture them to stardom as obtained in other countries.

Speaking on behalf of the two boards, the Director of Sports, Ministry of Youth and Sports, Mr Layi Adesiyan appreciated the state government’s support for sports which has yielded positive results.

He assured that the present boards have begun proper restructuring of the two teams with a view to making them formidable and not relying heavily on the government for funds.

He appealed to the government to facilitate quick approval of fund required to put Osun United and Osun Babes in good shape and make them attractive to potential sponsors and investors for them to achieve the revenue generation objectives.