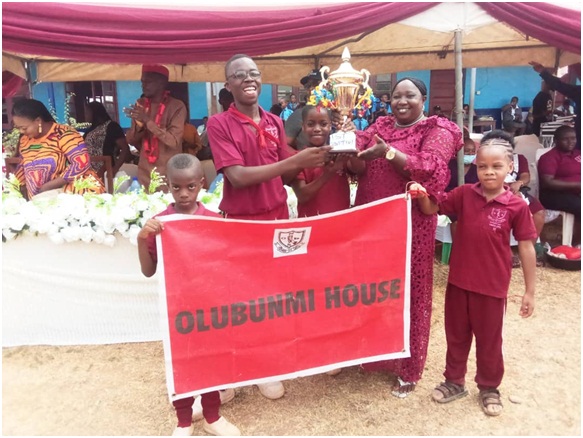 Red house has emerged over all winners of the 55th Omolere Nursery and Primary School (ONPS) athletics Inter – House sports held at the school field in Akure.

The Olubunmi house came first after gannered 185 points, Blue House second with 184 points while Green and Yellow polled 168 and 121 points to settle for third and fourth positions respectively.

Sporting Hope in a chat with the school head teacher, Mrs Josephine Adeleye said sports is part of education adding that everything should not be base on classroom learning.

She added that pupils needed to be involved in physical exercise, because it sharpen their brains.

The head teacher averred that sports would bring out the hiding skills in the pupils and could also help them to become a professional in future.

She said; “Sports is a veritable source of income. Therefore, I admonished parents to encourage their children to participate in sporting activities.

“I will also advised schools managements to keep the ball rolling by encouraging sports, it’s by the grace of God that the school is still waxing stronger over 55 years of existence”