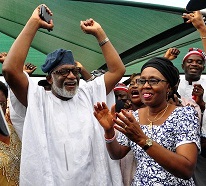 By Jubril Bada
|
The Chairman of a group, Aketi One To One in Northern Senatorial District of Ondo State, Alhaji Isiaka Yusuf has urged the members of the group in Akoko Northwest and Akoko Northeast  to redouble their efforts in ensuring Governor Oluwarotimi Akeredolu’s re-election is realistic.

He gave this advice during his courtesy visit to the members of the group in Ikare Akoko in Akoko Northeast local government area of the state.

Yusuf who is also Senior Special Assistant to the governor on Political Maters said there was need for the members to propagate the good work of the governor and work vigorously for the governor to be re-elected.

He explained that the need to work for his reelection is important for him to complete developmental projects his administration has embarked upon across the state.

While addressing the members of the group, the Special Assistant to the governor on Political Matters, Mr. Azeez Awe said the APC and the Governor Akeredolu must continue to deliver dividends of democracy to people of the state .

Awe appealed to members of the group to work with all party’s members for the successful re-election of the governor.

Also, the Caretaker Chairman of Akoko Northeast Local government area, Alhaji Ashimi who emphasized on how dedication promoted him to the position of council chairman encouraged the members to be more dedicated towards the second term bid of the governor.