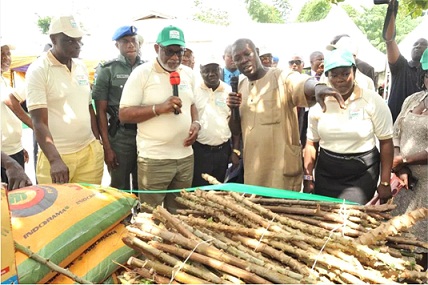 By Kehinde Adejumo
|
On February 24,  2017 when Arakunrin Oluwarotimi Akeredolu, SAN, took over the mantle of leadership in Ondo State, he promised the people of the state, especially the youth of job creation through agriculture. True to his words, in less than two years of his administration, over twenty one million naira had been distributed to farmers’ cooperative societies to boost agriculture under the FADAMA scheme , also more than one thousand metric tonnes of fertilizer have been distributed to farmers in the state for the enhancement of  farming.

This administration has re-activated the State’s Afforestation Project. The afforestation project sited at Omotoso in Okitipupa local government area of the state, the project according to the State Deputy Governor,  Hon. Agboola Ajayi is capable of providing employment for thousands of youths across the state.

He said the government had also mobilised 35,000 farmers for Anchor Borrowers’ scheme, all in a bid to create employment for the teeming unemployed youths in the  state.

In its efforts to take unemployed youths out of the streets, the government had empowered 18, 000 youths across the 18 Local Government areas of the state, through the programme tagged “Youths on the Ridges” in collaboration   with  the Federal College of Agriculture, Akure (FECA).

Agboola  said the purpose of the programme was to create enabling environment for youths in the state to take up career in modern agriculture.

He described the alarming rate of unemployment in the country as a time bomb that if not addressed now, could  lead to greater problems.

The Governor has also reiterated his administration’s  commitment to leverage on the agricultural potentials of the state at ensuring that youths are productively engaged for a better livelihood.

The Governor made the disclosure, during his inspection tour of the Cocoa Plantation at Ijugbere in Owo Local Government Area of the state.

While leading some members of his cabinet on tour of the project sites, Arakunrin Akeredolu noted that the establishment of the Plantation became imperative to reposition the state as one of the best cocoa growers in the country.

He added that the move is also aimed at boosting the tree crop sub-sector of the Agric value chain and essentially, to restore the lost glory of cocoa in the state.

Governor Akeredolu hinted that the project which is designed to occupy two thousand hectares of land in which 35 hectares have been planted with improved cocoa seedlings.

He also said that the plantation has a seedling production centre that has over 450,000 seedlings ready to feed the plantation and for distribution to new generation of young cocoa farmers across the 18 Local Government Areas of the state.

“Our five cardinal programme is clear and job creation is topmost and we are going to do that through agriculture.

“This project is a major one for us. We use to be the leading Cocoa producer in at least, Africa, if not the world.

“We will work hard towards ensuring that we regain that enviable position in cocoa production which would also boost our socio-economic development”, he said.

The governor assured that the Cocoa Revolution Project of the present administration would be worth investing on, in view of the fact that its improved seedlings has eighteen months for fruiting.

He commended President Muhammadu Buhari for his interest at supporting the State Government on its agricultural policies aimed at creating jobs for the teeming unemployed youths as well as ensuring food security for the state and beyond.

“President Muhammadu has always felt that there must be a Cocoa revolution so that we can  be where we used to be as the leading Cocoa Producer in the world.

“So, we decided to look for a site and we got this Ijugbere area so that we can have several hectares of Cocoa plantation.

“We are looking at the possibility of bringing the President to see the efforts we are putting in place to make our dreams realizable. We have been to the nursery and it’s well done.  I say well-done to the Ministry of Agriculture”, he said.

Addressing people in the various farm settlements who trooped out to welcome him, Governor Akeredolu promised that work would soon commence on the farm road so as to make their farm produce easily transported to nearby markets.

Commissioner for Agriculture, Otunba Gboyega Adefarati said the multiplier effects of the  agricultural policy of the Akeredolu-led administration would soon begin to impact on the socio-economic development of the Sunshine State.

” The aspirations of  government towards development would remain a mirage until youths were engaged positively and productively.

“Agriculture remains the alternative and panacea to the nation’s economic problem” , he reiterated the  administration’s commitment to create jobs through agriculture to revive the economy and make unemployed  youths self reliant.

“Agricultural training programme is a better empowerment than any programme because it is capable of  giving jobs to thousands of youths. “The state government has a lot of agricultural programmes for youths in the state because it is the best alternative to white collar jobs.

He said the South-West used to be a major player in the agricultural sector and a force to reckon with in foreign exchange earnings through farm produce. But today hunger seem to be staring the region  in the face in spite of arable land and good weather.

In order to correct this ugly trend the government had put in place several agricultural programmes, “any government that does not embrace a strong agricultural development as a backbone is nothing but a pipe dream,” Agboola said.

One of the participants in the “Youths on the Ridges”, Mr Tunji Apejoye commended the state government for organising such programme at this time , saying the programme has made him to be gainfully employed.

He said the government should go further and adopt a system where loan for agricultural purposes that will not attract more than a single digit interest rate could be given to youths, saying that agriculture is capital intensive, and also government should prepared expanse of arable land available for interested youths in all the three Senatorial Districts of the state suitable for mechanised farming.

Apejoye said we cannot run away from mechanisation be it in crops or in livestock if the government’s  aim of youths taking up farming as a career will be achieved.

He also advised the government to establish farm settlements, equipped with modern facilities such as good roads, access to potable water, internet and health facilities in order to encourage interested youths to remain in agriculture, to grow their crops, rear animals and raise their families and contribute to the economic development of the country.

He appreciated the state government for the empowerment programme. He called on the local governments to also be involved, saying they can help with the provision of farm implements and seedlings.

He suggested further that the government need to boost  mechanised farming for youths to remain in the agricultural sector, and ready market should be made available for  whatever farmers produce, this will go a long way to boost youths’ interest in farming.

Apejoye said the programme has ended his six years of joblessness  after graduating from College of Education, he  appealed to the government to make arable land and low interest rate loans available for  all interested youths .

The wife of Ondo State Governor, Arabinrin Betty Anyanwu-Akeredolu, has also urged women to embrace agriculture as she called on women in the state to  rise up and develop interest in agriculture in order to bridge the gender inequality in the sector and prevent bleak future for the youths.

According to her, many youths’ lives have been lost in their struggle  and determination to survive as a lot of them choose to travel through the desert and cross the Mediterranean Sea in their desperation for greener pastures abroad, stressing that in the course of such sojourn, many have died while some had been sold  as slaves or sex workers among other dehumanizing situations they encounter.