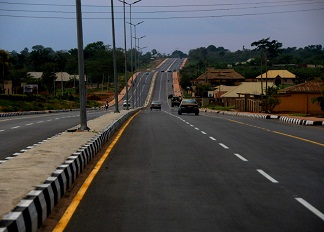 By Bisi Olominu
|
The Regent of Ibulesoro, in Ifedore Local Government Area of Ondo State, Princess Moyinoluwa Falowo has appealed to the state government to  construct the Akure-Ibule link road.

The Princess who spoke with The Hope in Ibule said the road if constructed on time by the government would ease transportation  problem in the area.

She also called on the government to extend the ongoing roads construction across the state to Ibule community.

The Regent who lamented the plight of her people, said the road project would not only bring development to the community, but would also help to ease transportation of  their goods to the market.

She added that the road will be an alternative route to the ever busy FUTA North Gate road where accidents occur  daily.

“If the road is constructed, it will be an alternative route to the expressway leading to Ilesa. I will be ever grateful to the governor if he can come to the aid of my community.

“I must commend the state government for the giant strides it is  making on roads construction in the state. All the roads have economic development and are not restricted to a geographical  location.

But I am appealing that the governor should extend it to Ibule. If Aule linking  Ibule road is constructed today, the economic advantages are enormous as people  coming to Akure,  would save time,  people will be at ease to do business in the state capital, more houses will spring up in the area, and people working in the  state capital can even build their houses at Ibule.

She also called on the state government to intervene in the plight of her people as the community had been plunged into total darkness by the Benin Electricity Distribution Company, (BEDC) for the past four months despite paying their  bills.