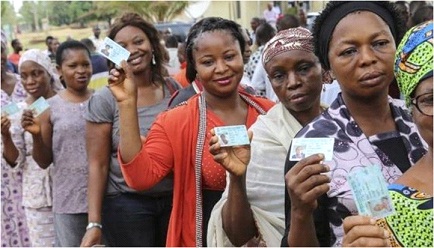 Daily, Nigerians are inundated with several stories; both founded and unfounded that had eroded their trust in the Nigerian electoral processes. Currently, vote buying is holding sway among the electoral offences.

Since 1999 which marked the onset of the current republic, most of the elections have been marred by violence, electoral malpractices with vote buying being the chief of it all.

The fourth republic came into being in 1999 following decades of military rule, although it floundered for a long spell with the nation under constant threat of reverting back to military rule.

Until very recently, rumours of coup d’etat reoccurring hung over Nigeria like the sword of Damocles.

The elections that ushered in Nigeria’s fourth republic came in a relatively peaceful way as the country transits from authoritarian to a civil regime.

However, this is not to say that the 1999 elections were devoid of electoral malpractices and corruption. Then, Election observers reported late commencement of polling, late arrival of election materials, missing names of eligible voters in the register, early closure of voting at some polling units and bribing of voters.

The 2003 election was the first election to be conducted by a civilian government. This was the litmus test for Nigeria’s democracy as the 1999 elections were conducted by the military regime. The Conduct of the 2003 polls was far from transparent and credible elections.

According to reports, European Union (EU) observers of the election reported that:  “though the ballot box was full by midday, only 85 names on the list of 743 registered voters were ticked on the register. At a third polling station, 50 cast ballots were suspiciously folded in the same way, and the first 50 names on the voter list were ticked in alphabetical order”………

The display of electoral malpractice in the 2003 polls gave the impression that there was a deliberate attempt by the ruling party to retain power by all means. Nigerians went to the poll again in 2007 to elect another set of leaders. The 2007 elections turned out to be the most discredited in Nigeria’s electoral history. The International Crisis Group described 2007 polls as ‘failed elections’ and the African Confidential in its 2007 May publication stated that ”the 2007 polls were a troubled transition from civilian-to-civilian regime.” The 2007 elections were marred with unimaginable kinds of physical violence.

Violence and all forms of electoral malpractice are contributory factors to the decreasing turnout of accredited voters in past elections. According to data released by the Independent National Electoral Commission (INEC), only 43.65% (29,432,083) out of 67,422,005 registered voters, voted in the 2015 presidential election and a decreasing 35.66% (28,614,190) out of 82,344,107 registered voters turned out to vote in the 2019 presidential elections.

The trajectories of elections in Nigeria highlights a worrisome trend characterized by intimidation of voters, partisanship by electoral offices, under-aged voting and impersonation, diversion of electoral materials and theft of ballot boxes. Nigeria is still yet to reform its electoral laws. As a result, this has hampered the adoption of alternative approaches and strategies to checkmate this ugly trend in our nation.

Electoral malpractice is counterproductive to the entire process of choosing credible leaders who can represent the people and the interest of the nation. The effects of this menace cannot be overemphasized. They are pervasive and with time they become generational if not properly curbed.

In recent times, electoral malpractice has discouraged the political participation of citizens. This was evident in the 2019 elections where most voters who turned out for the presidential election refused to turn out for the gubernatorial election based on the reason that their votes were neither counted nor included during the collation of results due to vote rigging and other forms of electoral malpractice.

Electoral malpractice has enhanced the enthronement of leaders that lack accountability, integrity and responsibility in various levels of public offices in Nigeria. This has affected the quality of leadership and governance in our nation. As a result, Nigeria is still battling with the challenges of bad leadership, poor governance and corruption. These issues have adversely affected social transformation, economic advancement and national development.

Furthermore, electoral malpractice leads to violence, chaos, anarchy and unrest. This has been the trend since 1999. As a result, several people have lost their lives and valuable properties have been destroyed. In most cases, the perpetrators of these heinous crimes are neither brought to book nor made to face the wrath of the law due to their affiliation to godfathers and corrupt politicians. Although this trend has persisted for decades, there is need to change the narrative so our nation can attain national development in all aspects of governance.

Currently many Nigerians believe that votes cast during elections do not count. Apart from fear of violence erupting at polling units, the above is another factor causing disenchantment in the minds of the electorate.

To rekindle the hope of the electorate in the election process in Nigeria, a new innovation which is guaranteed to be an improvement on the card reader is in the offing. It is the Bimodal Voters Accreditation System.

Giving this insight is an official of the Centre for Democracy and Development, Austin Aigbe during a 2-Day Capacity Building workshop for journalists and Civil Society Organizations (CSOs) in the South West organized by the Center in conjunction with Independent National Electoral Commission (INEC)

Aigbe described the Bimodal Voters Accreditation System (BVAS) as a game changer and an improvement on the Card reader which performs three functions before, during and after elections.

The first function of the BVAS is used for Continuous Voters Registration (CVR) during registration, it is used for voting and accreditation during elections, and uploading of results to the portal after elections.

Under this arrangement, he said that citizens will have access to the portal where the election results will be displayed.

In his words, there are 176, 846 polling units in Nigeria. In any units where are discrepancies, the citizens could ask questions rather than listen to dissenting voices that might want to undermine the election process.

He hinted that it is a work in progress that will change the narratives by the time it is in operation. He however regretted that it cannot be in operation by the coming 2023 election.

He therefore called for more alertness and passion from the citizens as it will go a long way in ensuring that their votes counts.

He also urged all election workers such as observers, Journalists, healthcare providers and security men to ensure that they vote so that their voices too could count in selection the nation’s leaders.