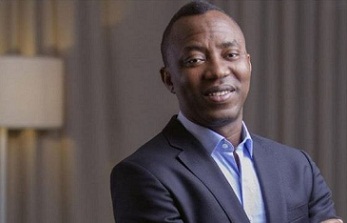 By Seye Fakinlede, Okitipupa
|
Members of the National Association of Kirobo Students, during the weekend, staged a peaceful  protest at Idepe in Okitipupa local government demanding the federal government, to release Omoyele Sowore.

According to them, they were beneficiaries of the Sowore Scholarship Foundation, and the continuous illegal detention of Sowore by the State Security Service, (SSS) might affect their academic  next session.

The spokesperson of the group, Comrade Samuel Irinyemi, told journalists that the protest was an awareness to the federal government to use her constitutional power to mandate security agency, obliged  court’s ruling.

The group,  chorusly emphasized that Sowore’s persistent detention, was already felt by students, workers, orphans, and aged people who are beneficiaries of his philanthropism to his Local Government.

Recall at that Sowore, the Sahara Reporter Publisher, was arrested in Lagos on August 3, 2019 while preparing for a protest- “Revolution Now”, towards ensuring the improvement of welfare of the citizens, and good governance in the country, but had since been illegally detentained by the SSS despite meeting the conditions of the bail as ruled by Justice Taiwo, and recently been ordered to be released by Justice Ojukwu on November 6, 2019.