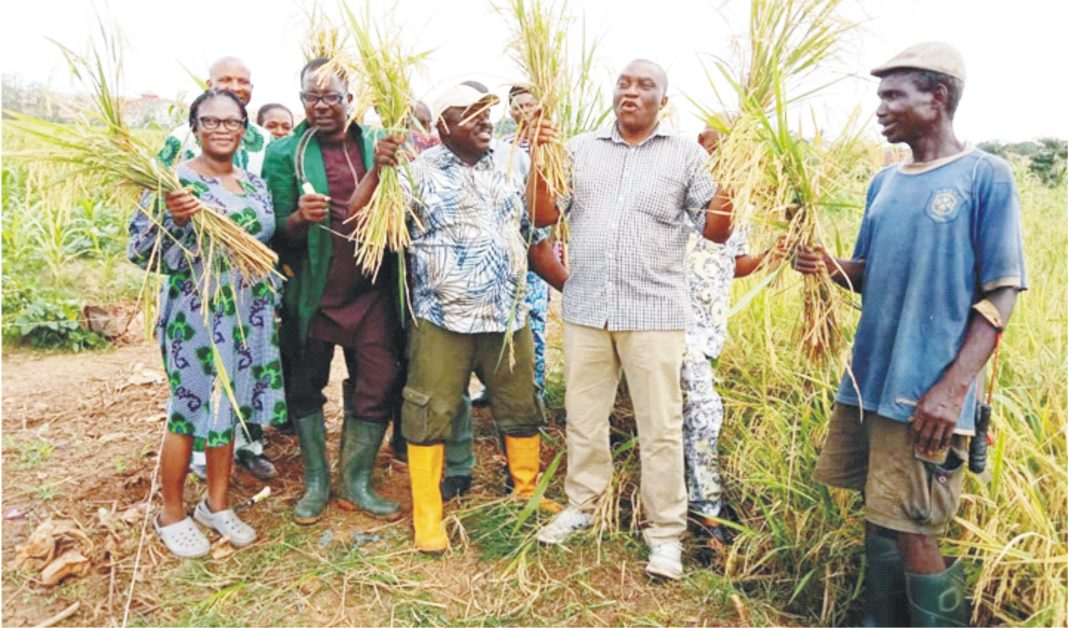 Respite might be on the way for hard pressed Nigerians as prices of food items may soon tumble, The Hope has learnt.
The ray of hope was given by major producers who confided in our correspondent, that they will soon flood the market with locally produced food items to bring succour to the people during the Christmas and New Year festivities in Ondo state.
Among the food items likely to be affected include: Rice, Tomatoes, and cassava-related products.
Besides, the Ondo state government has entered into partnership with the National Centre for Agricultural Mechanisation, NCAM to achieve massive rice production in the state.
Sawah Eco-technology is a Japanese model for rice farming which increases yields optimally.
The state government officials led by the Senior Special Assistant to governor Akeredolu on Agric and Agric business, Akin Olotu and a team from NCAM have inspected the Sawah Rice farm in Akure, the state capital.
During the tour, Olotu described the invention as the easiest way to boost rice production in Nigeria and stated that the state government would continue to pay serious attention to agriculture.
Akin Olotu said: “The Sawah Rice technology has tremendous advantages over the conventional methods we have been using to plant rice.
Other stakeholders who spoke with our correspondent declared that the country has in the recent time achieved 90 percent of rice production and about 50 percent of tomato production while over 40,000 youths have joined in cassava cultivation.
The Deputy Director, Federal Ministry of Agriculture and Rural Development Dr. Fatimah Aliyu said rice production has improved significantly.
She said there were big and mechanised integrated rice millers to complement the small and medium scale millers in the country as it was obtained in other parts of the world.
“We have gone more than half way because we are almost at self sufficiency. We produce over 90 percent. So, during the COVID 19 lock down, we were no longer importing and was there scarcity of rice? Rice was available and where did that rice come from? From Nigeria.”
This, she observed, was a pointer to the fact that the farmers had made appreciable progress in rice production in the country.
She also hinted that the Federal government and its development partners have been training farmers across the country in order to improve the quality of local rice, which she said had improved and become more competitive with foreign ones.
Aliyu stated that the costs of production variables like electricity, labour and transportation among other factors that led to increase in price of rice but it was not as expensive as the foreign rice which was sold at N30,000 as against between N24 and N25,000 for local rice.
The Vice Chairman of Sunshine Rice Farmers Association, Mr. Yinka Labiran urged people not to entertain any fear assuring that rice production this year was better than last year due to favourable weather condition.
He said there would be surplus and cheap rice for the yuletide because many farmers were currently harvesting.
On tomato production, Ondo State Chairman of National Tomato Growers, Processors and Marketers of Nigeria (NATPAN), Mr Adebiyi Oluwalanu said there has been massive production of the product in the West and coupled with the tomatoes from the North, lead to glut as from December this year.
He called for urgent need for government to establish tomato paste factories and to also resuscitate the moribund tomato paste factory at Arigidi Akoko to mop up the excess in production.
“Tomato demand for Ondo state has been met and we now export tomatoes to neighbouring states like Lagos, Oyo and as far as Benin and Port Harcourt,” he noted.
According to him, over 80 percent of youths have trooped into the business, seeing that it is lucrative and this has consequently reduced unemployment rate.
While speaking on the cost of Tomatoes, Oluwalanu said it would be cheaper by December unlike what was being sold now where a crate is between N5,000 and N 7,000 as against the N15,000 last year.
According to him, the farmers sought tomatoe market to cut the jinx of wholesalers and retailers who may have been selling at high cost while they bought cheaper and to make it affordable to the people.
The former National President of NCGA, Prophet Adewunmi also said that the cost of cassava would be reduced to what was obtained in recent time because farmers had begun to harvest their products.
Adewunmi said the federal government budgeted N40billion for cassava farmers for the year but the drought last year delayed cultivation till this year when the weather was favourable.
“There will be better availability of cassava for consumption and industrial use. It cannot go up as it used to be but it may not go down due to high dollar rate, which is affecting the cost of production in general.”