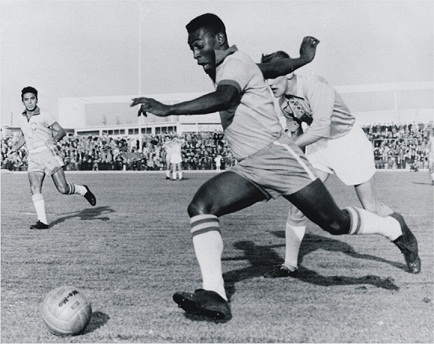 He led a good life and made a huge contribution to the development of global football in particular and world sport in general, having an enormous generosity of spirit and humility, despite his greatness as a footballer and sportsman, building bridges across nations, races and even religions, so said  Muhammadu Buhari, President of Nigeria.

He made millions of young boys in the Global South to dream, through a profile as a Global icon of sporting excellence and high athletic achievement, giving an inspirational model which encouraged young men to transcend their limitations and defy all economic, social, cultural and political barriers, his legacy extending beyond the soccer pitch, so said William Ruto, President of Kenya.

We are saddened to learn that the n football legend has passed away, fondly remembered as  the three-time World Cup winners, with a flair when he dazzled opponents, so said Hakainde Hichilema, President of Zambia.

Hakainde Hichilema, Muhammadu Buhari, and William Ruto waxed ecstasy over the late Brazilian soccer star, Pele, originally named  Edson Arantes Do Nascimento. He not only played football with a flair when he dazzled opponents, he was a global icon with a high athletic achievement, strengthened by an enormous generosity of spirit, despite his greatness.

A brutal conflict broke out between Nigeria and a secessionist state, Biafra, a civil war based upon the wishes of the Igbo people to break away from the central government. An estimated two million civilians lost their lives and up to 4.5million got displaced from their homes, before Biafra was subdued and assimilated back into Nigeria. Santos, Pele’s club,  arrived right in the middle of the battle, ready to play a match in Benin City, the capital of the then Mid West State.

The then military governor of Midwest State, sports-loving Brigadier Samuel Ogbemudia,  decreed a local holiday and opened up the bridge that connected Benin with Biafra so that both sides of the divide could witness Santos’ 2-1 victory over Nigeria in front of a crowd of 25,000 spectators. The  ceasefire barely lasted for the duration of the game; as Santos’ plane took off, players could hear from inside the craft the sound of gunshots that marked the resumption of conflict.

Pele and his Santos FC teammates visted one of Ghana’s biggest football clubs, Accra Hearts of Oak on 6 February, 1969. Santos battled to hold Accra Hearts of Oak to a 2-2 draw at the Accra Sports Stadium, with Accra Hearts of Oak striker Abeka Ankrah opening the scoring in the 27th minute. Pelé struck to pull the guests level before the break, before Ghana’s own “Pele” Amusa Gbadamoshie re-established Hearts’ lead in the subsequent half. Edu spared Santos their blushes with an equaliser that denied Hearts the win they would have cherished greatly.

Pelé was the third generation of his family to be born free, while Brazil did not abolish slavery until 1888,  the last country in the Americas to do so. Black experience in Brazil exhibited some contradictions, even though the races mixed together, with everyone having some black, or indigenous Indian or European or whatever blood. Still, after the abolition, racism existed in Brazil, However, Pele transcended the racial divide through his fortune of becoming both famous and wealthy at a young age, with people treating him differently. Despite this, he never forgot his roots, in spite of the shelter of his fame and money, identifying himself with the downtrodden, where many others would have forgotten their roots, in order to write their history in the desperation to become a member of the ruling class.

His refusal to integrate himself as a member of the ruling class endeared Pele to the blacks in Brazil, as well as millions of black men in Africa, who saw him in the same mold as boxing champion, Muhammad Ali, icons who refused to deny their roots, despite their worldwide fame and wealth. Memories of Pele playing in Ghana also made him popular in the continent, and Nigerians never forgot that when Pele came to town, the war between Biafra and Nigeria got shelved aside to honor an icon of the black race.

For Ghanaians,  especially early in the 1960s/70s when the country was dominating the Africa Cup of Nations and won three times, they  felt proud to be likened to Brazil at that time, especially as Pele propelled the nation to international attention and success, through his spectacular play during the 1958, 1962, and 1966 world cups. When Brazil won the 1970 world cup through the last goal Pele set up for Carlos Alberto, it felt like a feel-good story, with thousands of African youths  inspired to recreate the same talent and prowess in football and other endeavors of human life.

Africans looked at Pelé’s story as a source of inspiration. No matter how bad things were, they told themselves, they had to be at their best, even when handicapped. Pele made Africans to work hard and push their talents through, especially for youths who grew up then. He spearheaded a host of black sporting heroes, Muhammad Ali, Dick Tiger, Jesse Owens, Kareem Abdul-Jabbar, Jim Hines, and others.

Then, the slogan was I’m black and proud, a slogan popularized by the late great musician, James Brown. Thousands of Africans named their sons Pele, hoping that it would enable them recapture the brilliance of the magnificent Brazilian. When Pele, along with Franz Beckenbauer joined the Cosmos football club in the North American league in the mid 70s, young blacks who just grew up became familiar with the soccer superstar. They dreamed of the money Pele made, dedicating themselves to achieve the same feat through excellence and practice.And many did, since Pele opened the way for many black superstars. Sugar Ray Leonard replaced Muhammad Ali as a sporting hero. Ghana’s Abedi Pele, one of those named by their fathers as Pele, triumphed over Africa. Though Ghana did not quite become the Brazil of Africa, other nations tried to emulate the Brazil example, an example synonymous with Pele.Many considered Pele to be the most complete soccer player in the history of the game, accounting for his choice as the most outstanding football all time. Of course, many tout Diego Maradona, Lionel Messi and Cristiano Ronaldo as the best fit for this position. But for people who watched Pele spearhead the last goal of the 1970 world cup in Mexico, when eleven Brazilian players touched the ball before it entered the net, Pele would remain their greatest player of all time.