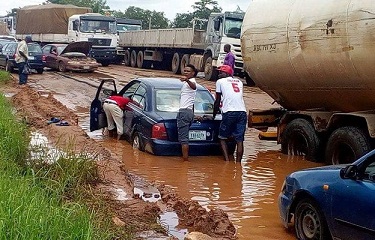 By Sunmola Olowookere
|
Repair of failed portions on federal roads in Ondo state in particular and other similar portions accross the nation is billed to commence immediately after the rainy season, The Hope can authoritatively report.

This among other facts were revealed in a chat with the Ondo State Controller of Works at the Federal Ministry of Works and Housing, Mr Lere Farounbi.

This came following the Speaker of the House of Representatives, Mr Femi Gbajabiamila’s assurance that all agencies of government involved in federal road maintenance would start work on the rehabilitation of the bad portions of the roads in earnest.

Farounbi expressed worry and concern over the deplorable state of some of the Federal roads across the nation.

The Controller of Works explained that Nigeria is still going through rainy season and that there is little the government could do in the circumstance.

In response to the clamouring for the rehabilitation of the failed portions, he stressed that repairing roads during the rainy season is like flushing money down the drain as the repair would not hold.

He said that prior to the commencement of the project, the ministry is currently carrying out evaluation of the failed portions of the roads and determining the amount of money that would be enough to repair them.

He stated that resources are already been earmarked for the execution of the project and that work would start as soon as the rain ceased.

His words “last week, I was at Abuja. I learnt that funds for the repair were already being budgeted. The proposals for the rehabilitation have been submitted.

“We already have the budget for the award of the contract. When the contractors start work, it will be supervised by the ministry”.