Residents advised on proper use of ITNs 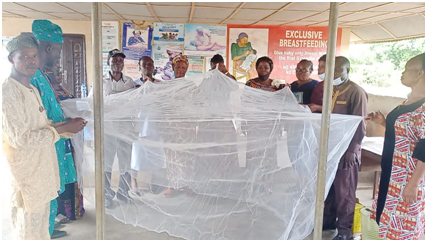 Residents have been advised to make proper use of Insecticide Treated Nets (ITNs) to contain the spread of malaria in the society.
The wife of the Chairman, Irele Local Government, Mrs Morenike Ajimotokin gave the advice during the distribution of Free Insecticide Treated Nets (ITNs) in the local government.
No fewer than 124, 200 Insecticide Treated Nets (ITNs) were made available for house to house distribution in partner with GiveWell Implementation Malaria Consortium.
The flag-off ceremony was held at Ode Irele Health Center, which had in attendance the coordinator of the Donor, “GiveWell Implementation Partner: Malaria Consortium” and the health workers.
Speaking at the event, Mrs Ajimotokin enjoined the people to make sure Irele local government was malaria free.
Adding that malaria has become a major public health concern, especially as it was one of the leading causes of maternal and child deaths in the local government.
She noted that the disease was preventable and curable, stated that the use of treated nets will significantly reduce the risk of contracting the parasite.
According to her, one of the sure ways of reducing malaria for now, was using the insecticide-treated mosquito net.
She therefore urged people of Irele to take advantage of the exercise to bring down the number of malaria cases.
She appreciated the efforts of the wife of Ondo State Governor, Arabinrin Betty Anyanwu-Akeredolu, Ondo State Ministry of Health, PHC Coordinator, Irele Local Government, Dr Joseph Akporeme and the Malaria Focal Person in Irele Local Government, Mrs Margaret Adetarami, for their support in ensuring good and healthy living conditions for everyone in the state.
She promised to also replicate the same passion in championing the war against malaria in the local government.