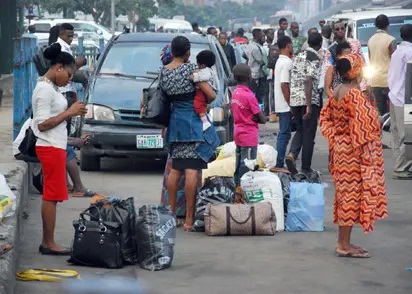 Residents in Ondo State are lamenting over a hundred percent increase in transport fares as a result of fuel scarcity in the state.

Investigation conducted in some major towns across the state revealed that a drop charged by commercial drivers has jumped from N50 to N100.

A commercial motorcyclist who did not disclose his name stated that it has not been easy coping with the scarcity of fuel, which he attributed to the increase in fare prices.

His words: “We have to queue at the petrol station for long hours and we buy it at an exorbitant rate.”

He observed that the trend did not have any serious impact on patronage from passengers, as he said, “people must go to work. It’s just that they negotiate for lower prices. For example, someone who is asked to pay N200 instead of N150 that was previously charged may negotiate for N180, “he said.

Adebukola Adebayo, a caterer, lamented that the hike in transport  has a very terrible impact on her business, as it had placed a heavy financial burden on her.

She said: “Most of my customers get their goods on delivery and I will have to pay half of the fare to encourage them to buy what I sell.”

Investigations by The Hope also revealed that the increase in fare has not spared the aviation sector either.

According to a source in the sector, the number of air passengers has dropped drastically, due to a surge in the cost of air travel which can be linked to a rise in the price of aviation fuel.

Since last week, operators under the umbrella of the Airline Operators of Nigeria (AON) have increased air fares by about 100 per cent with a one-way economy ticket selling from Akure to Abuja going for N50,000.

They blamed the decision on the increasing cost of operation, especially the price of aviation fuel which has almost quadrupled, now selling for over N410 per litre.

Transport fares from town to town have also increased. Owo to Akungba Akoko, a journey of not more than 25 minutes, which usually goes for N300 is now N1000 while Owo to Ikare is N1200.

Motorists from Ikare Akoko and environs have resorted to buying fuel from black marketers.

Our Correspondent in Owo gathered that petrol sell at prices ranging between N200 and N225 per litre with the exception of BOVAS petrol that sells at N162 per litre.

Meanwhile, people have been decrying the situation; calling on the federal government to take drastic step to save the situation as prices of virtually everything is going up.

In Okitipupa, the National Union of Road Transport Workers, town service chapter staged a protest against increase in the pump price of petroleum.

In a solidarity march on Tuesday, members were seen around the NTA roundabouts before proceeding to New Garage, calling on concerned authorities to intervene in the arbitrary increase in the current pump price in the country.

According to the union, the protest is to express their displeasure with the exploitation which has made life unbearable for them.

Mr. Oluwanbe Omoge, the Treasurer of the union in Okitipupa said, fuel which was sold at N160 per liter is now N200,

“Therefore, we are also increasing the transport fare from N50 to N100 so that our labour will not be lost.

“The sad thing is that most of the filling stations are hoarding the petrol, with the hope to sell at high price.  And the increase in transportation fares will make things more difficult for our passengers.