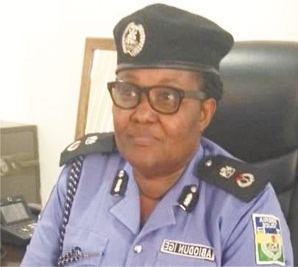 From Fisayo Akinduro, Osogbo
|
Some residents of Osogbo,  have stormed the premises of the Magistrates’ Court  in the town,  to protest the    remand  of 23   people  by the court for alleged breach of  public peace and possession of Indian  Hemp.

The accused  persons  suspected to be cult members  of the  Eiye  and Aiye   confraternities, were  dragged by the police before the presiding  Chief Magistrate, Mrs  Rofiat Olayemi on two-count charge.

The  protesters, who are parents,  employers, pastor  and civil servants, accused  the police of raiding  innocent  citizens for  offence they knew  nothing  about.

When the court could  tolerate  their  noise within the court  premiss, had  to instruct  policemen to chase them out.

The police prosecutor, ASP John Idoko, told the court that the accused persons  alleged to be the members of Eiye and Aiye secret Confraternities conspired to breach the peace of the state and were also found with Indian Hemp popularly known as Cannibis Sativa.

He said the situation led to many innocent citizens scampering for safety because of the unlawful act, carried out by the two cult groups  last week.

All the accused persons pleaded not guilty to  the four- count charge levelled  against them.

The defence  lead counsel, Mrs Teju Kolawole, had wanted to apply for an oral bail application, but the  magistrate, Rofiat Olayemi interrupted her and said she would not release the accused persons on bail, notwithstanding  their offences were entitled to bail.

The Magistrate  refused  the accused persons bail and ordered  their  remand in Ilesa prison due to security challenges facing the state,  adding  that their release   might hamper the peace in the state.

She said she was aware of the recent attacks by some suspected thugs in the state and the shootings that accompanied their clashes, saying that it was disturbing and needed to be curbed

Olayemi, told the  counsel that though  the alleged  offences  were  bailable, releasing  the accused persons on bail would jeopardise the efforts of the security agencies to restore peace to the state.

The Magistrate, however, said she would adjourn to a short date. She  therefore said  counsels to the accused persons would still apply for their bails orally.