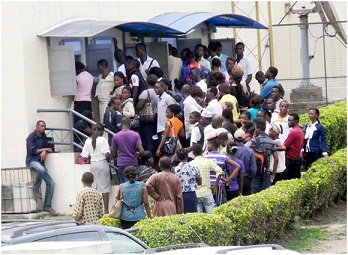 Some residents and traders in Ondo State have called on the Central Bank of Nigeria (CBN) to extend the deadline for the withdrawal of the old Naira notes to allow the new notes to circulate effectively.

This is sequel to the low circulation of the new redesigned Naira notes by commercial banks which had slowed down the withdrawal processes of the old notes.

They said the old notes were more in circulation than the new notes, to which some of them blamed the commercial banks for hoarding and not loading Automated Teller Machines (ATMs) with the newly designed naira notes.

A trader at the Oja Oba market in Akure, Mrs Bose Oyebola said more customers bought goods with the old Naira notes than the new ones.

“The new Naira note has not circulated at all; in fact, as a trader I have not seen much of it around.

“The deadline should be considered and extended for at least another three months to enable us to change all we have.”

Another trader who simply identified himself as Tony alleged that the new notes are being hoarded by the banks.

“If they had started pushing the new notes out earlier after it was launched, we would have been spending it by now.

“People are beginning to reject the old notes, whereas the new notes are unavailable,” he said.

A resident, Bukola Adebiyi, said: “Yesterday, I wanted to buy a banana, but you won’t believe two different traders rejected the old notes at separate places, I couldn’t believe it.

“We expect that by now there would have been more of the new notes around, than the old ones.

“Some of us have visited bank ATMs but it keeps dispensing old notes contrary to the directive of the CBN.

“When you deposit the old note at the counter in banks, they ask you to go and withdraw from the ATM, but the ATM keeps giving us back the old notes.

“I do not think the Jan. 31 deadline is feasible, the CBN should just announce an extension, because it is not our fault that we keep depositing and getting the old notes back.”