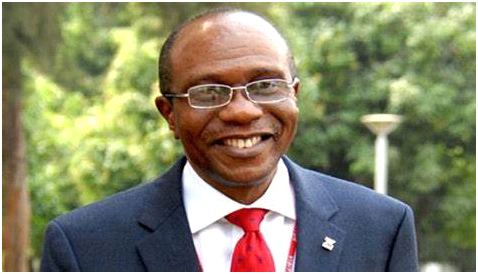 Eminent personalities have come out against Governor of the Central Bank of Nigeria (CBN), Godwin Emefiele, asking him to resign immediately as CBN Governor for the abuse of his office.

They said Emefiele can’t be in the office as a Governor of the CBN and be involving in politics.

According to them, his appointment is akin to that of a civil servant and as such, he must obey the civil service rule which orders any civil servant who wants to contest for political office to resign from active service.

They described his continued stay in office as an act of folly, adding that it is strange to see a sitting CBN Governor aspiring to be president.

It would be recalled that the Chairman, South-West Governors’ Forum and Ondo State Governor, Oluwarotimi Akeredolu, had first asked him vacate his office following his interest to run for president.

Akeredolu said the CBN Governor was wrong to have combined partisan politics with the very delicate assignment of his office.

According to Dairo; “if he wants to contest as CBN Governor, he should resign. He can’t be in office and continue to take advantage of government position to get whatever he wants to get. If he wants to be a politician let him resign and play politics”.

Speaking on whether President Muhammadu Buhari should sack him since he has refused to resign, Dr Dairo, said “the President doesn’t have that kind of courage to do that.

“It is just a waste of time telling the President to sack him. There is nobody that would do that under a President they know has a direction and focus”.

Arogundade also submitted that the Central Bank of Nigeria (CBN), apart from being used to store election materials that will be used for the conduct of the 2023 elections, Emefiele as the helmsman of the Central Bank who has also obtained the nomination form to contest for the post of President has violated the law guiding his office.

He said the Central Bank Governor supposed to have resigned his appointment before actively participating in politics, noting that his action has really breached the constitution of Nigeria’s public servant.

In his submission, an Ilawe-Ekiti-based Human Right Activist, Mr Okunola Ayodele, explained that the action of the Central Bank Governor, has further compromised the autonomy of the apex bank.

Ayodele said the performance of the statutory functions of the CBN which shall be in the national interest could not be left in the hands of a politically exposed person like Emefiele.

According to him, the Governor has ignored section 9 of the Central Bank of Nigeria Act and must resign if he actually want to be the President of Nigeria.

Similarly the former Nigeria Bar Association, Ikare Akoko Branch, said his (Emefiele) stay in office will raise the issue of favoring the party that sponsors him in the election since sensitive election materials are kept in his custody.

In the same vein, another prominent lawyer and the Obaja of Ijaja, Arigidi Akoko, Mallam Gani Asiru said the CBN governor must first resign if he should be taken serious.

Asiru said by virtue of his position, Emefiele is more or less a civil servant and by the civil service rule, he must resign at least three months before going into the primaries.

The traditional ruler said, if he fail to resign, Nigerians should approach court to stop him.

Former Deputy National President of Nigeria Labour Congress, Comrade Joseph Akinlaja, said the Governor of the Central Bank of Nigeria, should resign if he truly wants to pursue his ambition of becoming Nigeria’s next president.

He added that if he decides to go against the law, he should be removed by the government.

His words “I do not know what has come over him to say that he wants to run for the presidency of Nigeria as a president of the central bank. As a Nigerian, he has the right to aspire.

“The policies of the Central Bank under him have made our economy worse. If I were in his shoes, I will continue to do my job as a civil servant as my own contribution towards developing Nigeria.