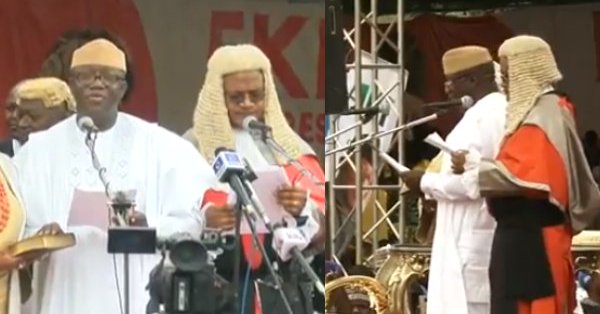 From Victor Akinkuolie, Ado-Ekiti
|
A Professor of English at the University of New Orleans, United States of America (USA), Professor Niyi Osundare has called on the  Ekiti State Governor, Dr. Kayode Fayemi, on the need to put in place good governance that will restore the loss value of the state.

The University Don made the call in Ado-Ekiti while delivering a lecture titled: STILL, IN DEFENCE OF LASTING VALUES” Reclaiming Our Land, Restoring Our Values” – My Ekiti Dream, as part of activities marking the inauguration ceremony of Dr Kayode Fayemi as the 12th Executive Governor of the state.

He stressed the need for the new governor to fight poverty and promote the standard of education that would return moral values of Ekiti ideas to the people.

Osundare, said politicians have been hiding under the sliding moral values of Ekiti people and poverty caused  by culture of laziness to cheat the system, saying the next government must tackle the menaces for history to judge him well.

The Poet,  condemned how the immediate past Governor of the state,  Ayodele Fayose has made the people across the globe to brand Ekiti people who are  highly knowledgeable as people who have no values by his conduct and utterances while in the saddle of government.

Osundare called on Fayemi to reclaim and restore a stable institutional policies that will eradicate poverty and all forms of social ills that had crept into Ekiti system through the actions of politicians during the last government.

“Ekiti were people that place priority on  knowledge , wisdom, they know the values of these virtues .

They were regarded as extremely stubborn people because they won’t compromise their integrity for anything.

“These were times when education was a pride and we had the brightest academics like: the late Professor Sam Aluko, Professor Adegoke Olubunmo,  Chief Afe Babalola, Prof. Ojo Ugbole, and many others.

We placed values on hardwork, knowledge acquisition and our parents sold their farms and clothes to send their children to school. They knew the rights from the wrongs at that time.

“But there came a demagogue who ran authoritarian government in Ekiti in a manner that had never been experienced by any state in Nigeria.

“He stopped at market places to buy roasted  corn and ate in public place just  to deceive the people when majority of our graduates were not provided with jobs and farm products were wasting away and our value system collapsed calamitously.

“Education that was regarded as our best industry was not well funded and our graduates that had earlier been regarded as the best in Nigeria for decades became practically half-baked and unemployable. Book and elitist thinking were his enemies.

“The culture of stomach infrastructure was introduced and Ekiti became a laughing stock . How populism manifests itself and the politician banked on the vulnerability in the system to mislead our youths.

“With Fayemi coming on board, he needs to tackle poverty and reenact value reorientation in Ekiti. He must come with policies and programmes of  actions that will prohibit miracle centres where students passed without reading and make Ekiti vegetation centre of knowledge .

“His (Fayemi) nose and ears must be closed to the grounds, he must be close to the people and eradicate ignorance and poverty that make our people to believe in stomach infrastructure.