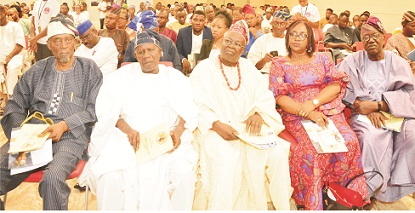 By Jubril Bada
|
Notable Nigerians have suggested  that  complete restructuring of minds of people in the country is the only way to sustain the legacy left behind by the late sage and first civilian Governor of old Ondo State, late Chief Michael Adekunle Ajasi.

The colloquium with theme “Promoting Economic Development , Social Justice and Rule of Law as Pathways to Stability , Peace and Prosperity in Nigeria” was held at the International Culture and Event Center (The Dome) in Akure with many dignitaries in attendance

Senator Olajumoke described late Ajasin as a visionary leader who has contributed immensely to the political and education development of the country through his commitment and honesty to public good and democratic principle.

Former Senator, Remi Okunriboye on his part, pointed out that Nigerians are selfish and more concerned about their pockets rather than the service they can offer the nation.

According to him, ” Ajasin has exceptional achievements that only  few people can achieve . The level of honesty of Baba was high. The scenario has changed that, is very difficult to achieve except people like us who people regard as old politicians.

Also, an educationalist, Chief Femi Aluko, said late Ajasin was an authority on education as far as the country is concerned saying that the education policy should not be allowed to die naturally.

He suggested that there should be improvement in sustaining the achievements of Pa Ajasin through publication of books on his achievements to encourage future generations that education is the key to success.