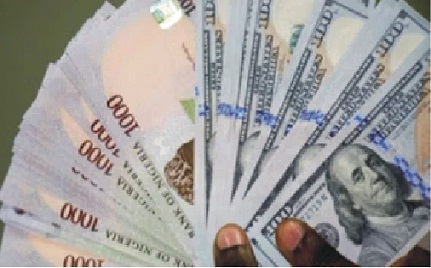 The Association of Bureau De Change Operators of Nigeria (ABCON) have said that the resumption of foreign exchange to BDCs would usher in stability in the market.
ABCON President, Alhaji Aminu Gwadabe told The Hope that the BDCs was and would remain the potent monetary tool of the CBN exchange rate stability instrument.
The Central Bank has said it will resume the sale of foreign exchange to the Bureau De Change on Sept. 7.
The announcement was made through a circular entitled ‘Resumption of sales to Bureau De Change operators’, and signed by the CBN Director, Trade and Exchange Departmen.
“The BDCs have always remained the potent monetary tool of the CBN exchange rate stability instrument.
“The resumption of sales to BDCs will in no doubt inject a robust liquidity to the critical retail end sector of the market and usher in stability, discourage, hoarding and speculation,” he said.
Gwadabe noted that the announcement on resumption of dollar sales to the association had caused the naira to gain over N5 to a dollar at the close of Saturday’s business as it closes to N470 to a dollar from all high off M476 to a dollar on Friday morning.
He however added that the association expected a strong positivity in the market with the take off of the policy.
Meanwhile, Nigeria’s exchange rate at the NAFEX window appreciated marginally closing at N385.67 during intraday trading on Friday, August 28, 2020.
According to the data tracked by the Hope from FMDQ, forex turnover dropped from $43.16 million on Thursday, August 27, 2020, to $12.09 million on Friday, August 28, 2020.
The decline is coming a day after the previous trading day increase in forex turnover following improved dollar supply.
This reinforces the continued volatility of the foreign exchange market and the scarcity of the greenback. The supply of dollars has been on a decline for months due to low oil prices and the absence of foreign capital inflow into the country.
The average daily forex sale for last week was about $71.13 million which represents a significant increase from the $24 million that was recorded the previous week. The day’s FX turnover is still a far cry from the $200 million mark that was recorded sometime last week.
Total forex trading at the NAFEX window in the month of July was $937 million compared to $875 million in June.
Speaking with an economist, Elder Fessy Olabode explained that the central bank moved towards exchange rate unification three weeks ago after it devalued the official rate to N380/$1.
“Despite the volatility and scarcity of foreign exchange, the Naira appears stable across the forex markets. The dollar shortage has forced banks to reduce drastically the dollar spending limits on their debit cards.
“The local currency has remained stable for some days as the Central Bank of Nigeria had introduced some measures targeted at exporters and importers in order to try to boost the supply of dollars in the foreign exchange market and reduce the high demand for forex by traders”.