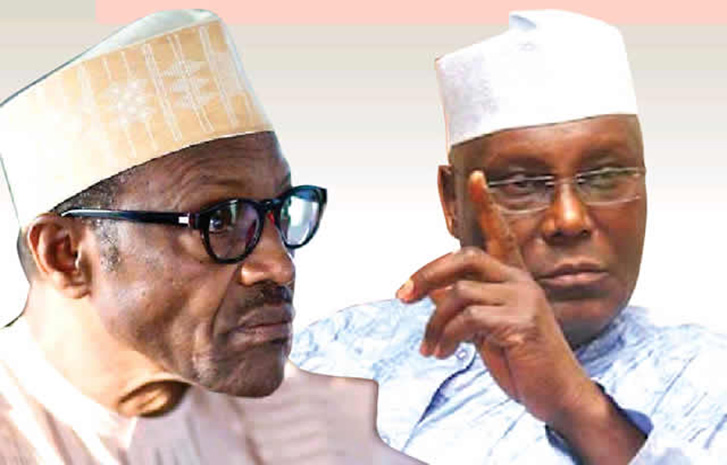 By Bisi Olominu
|
The 2019 presidential election will be very interesting, from all indications. It will be full of intrigues, permutation, strategy, mudslinging and little discourse of the present precarious situation of Nigeria.

It will be a straight fight between a retired general, former Commander of Nigerian Army, 82 Division, Retired General Muhammadu Buhari and a retired Custom Officer  and former Vice President of Nigeria, Alhaji Atiku Abubakar.

Muhammadu Buhari and former Vice President Atiku Abubakar, at the weekend, picked the presidential tickets of the All Progressives Congress, APC, and Peoples Democratic Party, PDP, respectively in style.

While Buhari’s  emergence was done by affirmation at the party’s convention in Abuja, Atiku went through a strenuous, money enticed primaries in Port-Harcourt and won the primary over other twelve aspirants of the party.

Currently, the duo remain frontrunners in the 2019 race for the presidency.

Although there are other candidates springing up from other political parties but none has the weight, experience and money that the two have in their kitty.

As the serving President of Nigeria, Muhammadu Buhari has everything from power, connection and friendship across the nation and the world.

Atiku Abubakar on his own is a successful businessman across the divide and a reputed to have connection of his business associates and friendship working for him.

President Muhammadu Buhari contested four times before he could capture the exalted position and coincidentally, Atiku Abubakar will be contesting for the fifth time next year February, in his aspiration  to become the president of Nigeria.

President Buhari would go into his fifth presidential contest next February, but this time around he would not be issuing “promissory notes” as he would have to run on his achievements of combating crimes, constructing second Niger Bridge, fighting corruption and insecurity, reducing kidnappings to the barest minimum, helping states to pay workers salaries, constructing Lagos/Kano rail, Lagos/Ibadan expressway, Abakaliki/Enugu road and several others.

Atiku on his part would say he served the country meritoriously as former Vice President to Olusegun Obasanjo and a successful businessman of repute.

While some political analysts would say that the president’s approval rating might have dropped in many of the states, President Buhari still has a lot going for him, one is that he is a man of integrity.

The President’s acclaimed integrity is one thing that many of his supporters have said would earn him some points in the next election, but some too have condemned cases of sleaze under his administration in which he ‘s believed to have looked the other way without acting.

By blocking all the loopholes and not allowing free money like it was for 16 years under the successive PDP administrations  is according to his enemies not the norm in Nigeria. This he has done successfully for three and half years.

These are some of his  achievements frowned at by his enemies, they all want it to be business as usual. Several allegations of certificate forgery among some of his appointees, mostly that of the former Minister of Finance, Kemi Adeosun and the present Minister of Communication, Shittu are what his enemies are using against him.

Despite what his oponents are saying, Buhari remains an enigma among his friends across all divides, even within his enemies camps and in the North,  many still see him as a myth.

The president pledged to focus on three areas: anti-corruption, security and the economy, and in the last three and half years of his administration he has done tremendously well on corruption and security.

In  his self rating, his government has been able to reduce corruption in the system.

While many have faulted this claim as being half-hearted in that pro-establishment politicians who are allegedly corrupt have been left off the hook, his supporters are quick to remind other Nigerians that former Governor of Plateau state, Senator Joshua  Dariye and many others have been convicted and sentenced to jail despite being on the same political party with Mr. President.

Presently former Governor of Abia, Dr. Kanu is on trial and despite being a member of the ruling party, the President has not stopped his trial in the court. Adding to this, many corrupt people have been jailed, many cases on corruption are pending in courts and money has been recovered by the present government from corrupt people. It is of note too that through the introduction of Bank Verification Number, BVN, by his government, many looted money kept in the banks have been trapped and forfeited to the federal government.

To tame corruption in the country, his government’s introduction of single account system has blocked all the avenue where government officials siphoned our commonwealth.

To the credit of President Buhari, he has recovered 18 local councils from the Boko Haram invaders. It is to his credit that Boko Haram has been technically defeated and their attacks now reduced.

On the economy, President Buhari has been able to navigate the country out of recession, even though his opponents would also argue that his economic policies drove the nation faster into recession.

His social investment programmes including the recently launched Trader Moni could also swell his support base,so also is the school feeding programme which will endear him to parents that could not afford three square meals for their wards

His present relationship with Asiwaju Bola Ahmed Tinubu could improve his chances in the South-West, while his incursion to the South South through Godswill Akpabio, Emmanuel Uduagan and notable politicians in the region would make him to get  mouth watery votes.

The large chunk of his vote will come from the North and in all the states under the All Progressives Congress, the governors, senators , House of Representatives members and party members  will work for the success of Buhari,  since the party is in the majority.

One thing many thought will work against President Muhammadu Buhari is the issue of Fulani Herdsmen ravaging the country. Many have accused him of turning his eyes elsewhere on the issue and not being decisive on the matter. Fulani Herdsmen have killed many souls, rendered many families homeless without bread winners, this some thought will be an albatross of President Buhari in next year’s election.

On the economy side , aside witnessing a recession, the recent warning by some fiscal and monetary authorities that Nigeria could again be headed for its second recession in less than four years could cause economic players to lose interest in his second coming.

The Fulani Herdsmen attacks in Taraba, Plateau, Benue, Adamawa could count against his election, while the

continued attacks on soft targets by the Boko Haram insurgents is a strong factor.

In the North Central region, the altercation between farmers and herdsmen is an issue. Cattle rustling in the North-West is a great factor too.

The wave of insecurity, especially kidnapping in some parts of Nigeria, if not urgently curtailed, could make him lose some points in the most affected areas.

His handling of the agitation Biafran and members of the Indigenous People of Biafra, IPOB, members could blight his chances in the South-East. But his various ongoing roads construction  in thier region could work in his favour too.

In a nutshell, the president would do well to look at his electioneering campaign promises as well as those made on his behalf by his party and close supporters with a view to immediately recovering lost grounds for his second term in office.

Atiku as a businessman after his retirement from Customs  Service was to create a business empire from all the nooks and crannies of Nigeria.

Though a Fulani and  Muslim like President Buhari, Atiku has connection in many parts of Nigeria. His business empire is being run by people from different parts of the country He has family linkages across the three major ethnic groups  in the country.

Meanwhile, the corruption  image  hanging over his  head is a minus to his aspiration of becoming the president of Nigeria. That perception had further been pushed by the William Jefferson episode in the United States. In that case,  Atiku’s name came up in the trial of a former US congressman, who was indicted over some felonies involving bribery in Nigeria.

Another nemesis of Atiku Abubakar is former President Olusegun Obasanjo. Obasanjo who was his former boss  has vowed that Atiku will not become the president of Nigeria in his lifetime. He has continued to  describe  Atiku as  highly corrupt and this may likely work against the interest of the former Vice President in next year’s  election.

Atiku is 71 and Buhari is 75, age is not on their side, but Nigerians have to decide between the two during the 2019 presidential election

Speaking on the two political gladiators, Pastor Tunde Bakare said the presidential election will be interesting as two giants will fight it together.

According to him, ” The contest is between two political heavyweights , not between an heavyweight and a minor. One is a combative old soldier and  the second is a  retired custom officer of note”.

The cleric, a former Vice Presidential candidate to Buhari said that  while commenting on the coming presidential election.

” The coming presidential election will be tough, challenging and interesting to watch. It is the one that Nigerians will decide”.