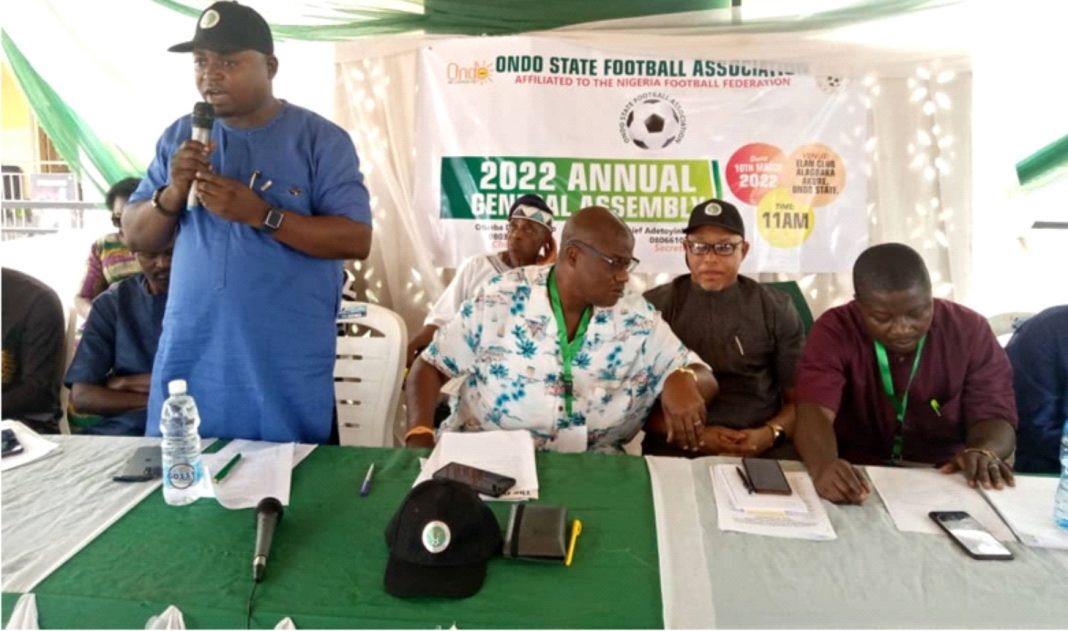 The Chairman of Ondo State Football Association, Otunba Dele Ajayi has appealled to the state government to return the funding of the association to the Sports Council.

Ajayi added that the government has not been meeting up its financial obligations to the association, adding that the money was meant for the development of football at the grassroots.

He stated this at the 20th Annual General Assembly of the association held in Akure, the state capital.

The former board member of the Nigeria Football Federation NFF also demanded for the statutory representative of the football association in the board of the state Football Agency.

According to him, “the law that set up the agency specified that Football Association FA should have its member on the board of the agency.”

He urged all football stakeholders in the state to be united in developing the game across 18 local governments.

The General Manager of the State Sports Council ,Mr Henry Babatunde admonished the association to bring in private sectors into their developmental plan, saying sports development can not be left in the hands of government alone.

Babatunde commended the association for their achievement in the last one year and their robust relationship with all the football clubs in the state, saying they should do more by going back to the grassroots to discover new talents.

He stressed that all football stakeholders should work in unison for the returning of the football association votes back to the council, stressing that it was the secret behind the success recorded in term of football development in the state .

Other stakeholders speaking at the event urged the state government to accelerate the return of Sunshine State back to the state.

They frowned at how the state’s own team has been playing their league matches in other state.

They also urged the government to recognise and award the football and other sports heroes that have done the state proud. Indigenous coaches and players should also be encouraged.

While reacting, the state Commissioner for youth and sports development, Mr Bamidele Ologun said all their request would be attended to at the appropriate time.

Ologun assured the stakeholders that the state sports complex would be renovated in no distance time, saying Sunshine Stars would soon return back to Akure.

He said:” we take grassroots football development as priority, we will continue to encourage indigenous talents.” he said .